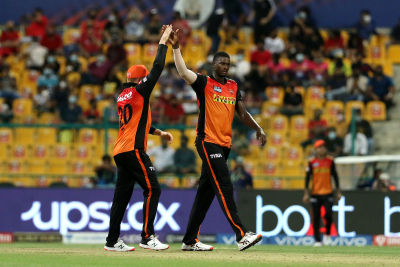 Needing 13 from the final over in Abu Dhabi, RCB fell short of the target despite Glenn Maxwell's 25-ball 40.

Virat Kohli's side remain third in the table and are now unlikely to overtake second-placed Chennai Super Kings due to an inferior net run rate.

A top-two finish means teams have two opportunities to qualify for the final, which is on 15 October.

Already guaranteed to finish the season at the foot of the table, Sunrisers had little to play for except pride, giving Roy an opportunity to take the shackles off and cement his place in the side.

The opener batted for 15 overs, scoring five boundaries on a tricky surface.

Despite his significant contribution, Roy also rode his luck at times, particularly in the ninth over - bowled by spinner Shahbaz Ahmed - when he could have been dismissed three times.

Roy miscued a big swing which somehow landed safely, two balls later he would have been run out had Kohli's throw hit the stumps and then the following delivery he top-edged it inches short of third man.

In the eleventh over, he was deceived by Harshal Patel's slower ball and, again, the ball landed between fielders.

Roy was eventually dismissed after he drilled the ball back to seamer Daniel Christian (2-14) and was caught and bowled.

There are few positives to take from Sunrisers' poor showing this season, but the emergence of bowler Umran Malik could be one.

The 21-year-old - playing in just his second IPL game - bowled with genuine pace and hit the deck hard, and was rewarded with his first IPL wicket when he dismissed Srikar Bharat.

In the ninth over, Malik reached a speed of 153 kilometres per hour (95 mph) - the fastest delivery of this year's competition.

It is a remarkable feat when you consider quicks such as Anrich Nortje, Kagiso Rabada (Delhi Capitals) and Lockie Ferguson (Kolkata Knight Riders) have all played in the IPL this year.

Malik was drafted in as a short-term replacement to the Sunrisers' squad last month after T Natarajan contracted Covid-19.

The ability to bowl high speeds with such regularity, while keeping an impressively low economy rate, impressed the cricketing fraternity.

More in this category: « The medical magic behind the Vodacom Bulls. PSL throw the book at MaMkhize and Royal AM. »
back to top