PSL throw the book at MaMkhize and Royal AM. 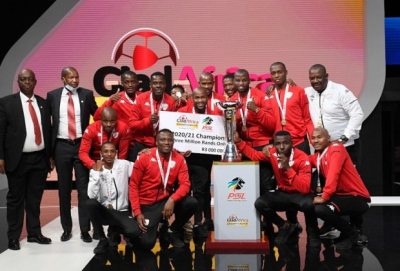 Royal AM owner Shauwn Mkhize and her son and Royal AM chairman Andile Mpisane have been charged by the Premier Soccer League for handing out cash to players on the pitch at Chatsworth Stadium.

The case is expected to be heard on October 14.

The PSL have also charged Royal AM for bringing the league into disrepute, after a video emerged of Mkhize and Mpisane walking onto the pitch with wads of R200 notes.

"The main charge is paying someone involved in a football match, a player or club official, money with regard to that match," said PSL prosecuter Nande Becker on Wednesday.

We have had quite a lot of kick back from supporters on this."

Becker added that the charge of paying money and bringing the league into disrepute are just two of a multitude of charges thrown at Royal AM.

"We are also charging the Covid-19 officer for failing to ensure everyone was wearing face masks. And we are charging the club for allowing an invasion of the demarcated area after the match. Only the people on the team sheets and on the bench are allowed on the pitch.

"There is also a charge of leaving the change room late (before kick off)."

Becker added that Mkhize and Mpisane had both been charged specifically with "dishing out money and not wearing a face mask."

Meanwhile Sekhukhune United finally got their hands on the GladAfrica Championship trophy on Wednesday evening.

The Premier Soccer League handed Sekhukhune their medals and a R3million cheque on Wednesday evening, with only a few of the players in attendance.

Saleng has since secured a move to Orlando Pirates, who then loaned him out to Swallows FC for the current season.

The referee awards were also given out on the night, with Thando Ndzandzeka walking away with the Referee of the Season while the late Shaun Olive was the recipient of the Assistant Referee Oof the Season accolade.