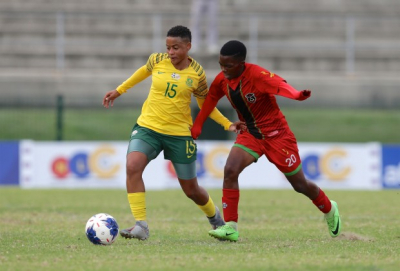 Banyana Banyana have failed to defend their Cosafa Women’s Cup crown, after they were edged 3-2 by Malawi at the Nelson Mandela Bay Stadium on Thursday.

Malawi will now advance to the final on Saturday at the same venue. They will play Tanzania, who earlier on Thursday defeated Zambia 3-2 on penalties after the scores were tied 1-all, at the end of regulation time.

The first chance of the match came after 24 minutes when Banyana defender Sibulele Holweni delivered a cross into the box, but it was parried away to safety by Malawi goalkeeper Mercy Sikelo.

In the 37th minute, Malawi midfielder Ireen Khumalo played a pass to Ruth Nyirongo and she laid the ball for Fazila Chembekezo who used her head to beat Banyana goalkeeper Kaylin Swart.

Banyana equalised in the closing stages of the first half when defender Holweni rifled home a thunderous shot from the edge of the penalty box for her third goal of the tournament.

Malawi retook their lead after 73 minutes when Asimenye Simwaka delivered a close-range pass to Sabinah Thom and the Malawian attacker managed to sneak the ball past desperate Janine van Wyk and Swart.

Malawi’s lead did not last long as Banyana drew level when Holweni successfully converted from the penalty spot to beat Sikelo after Tiisetso Makhubela was brought down by Madyina Nguluwe in the box.

A defensive mistake by Banyana captain Van Wyk allowed Thom to register her second goal of the match when she pounced on a loose ball in the box to beat Swart and secure a place in the final for the Malawians.