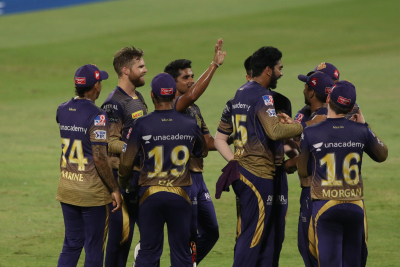 Kolkata Knight Riders all but confirmed their place in the Indian Premier League play-offs with a one-sided 86-run win over Rajasthan Royals.

Royals managed a dismal 85 all out in reply with Shivam Mavi taking 4-21.

Mumbai Indians can still mathematically leapfrog KKR into fourth place but will need to beat Sunrisers Hyderabad by a record 171 runs on Friday.

Royals end the season in seventh place and their wait for a second IPL trophy - having won the inaugural competition in 2008 - goes on.

In arguably their most important game of the season, KKR made a cautious start to their innings, reaching 20-0 after four overs, 34-0 after the powerplay and 50-0 after eight overs.

The platform was then set for opener Venkatesh Iyer to let loose, and he launched seamer Jaydev Unadkat for two sixes in the ninth over.

Iyer seemed to have his eye in after a patient start to his knock, but was dismissed rather tamely when he was bowled trying to reverse sweep leg-spinner Rahul Tewatia.

Gill then showcased his repertoire of shots - hitting four boundaries and two sixes - before being dismissed by Chris Morris,the IPL' most expensive signing.

KKR captain Eoin Morgan - who has had a woeful time with the bat in the competition - came to the crease at 17.1 overs and finished unbeaten on 13 off 11.

The England skipper ends the group stage with 124 runs from 14 matches, at an average of 12.40 and strike-rate of 102.47, but showed a glimpse of vintage Morgan when he flicked the penultimate ball of the innings for six over square leg.

The Royals reply got off to the worst possible start when opener Yashasvi Jaiswal was bowled by Shakib Al Hasan.

That dismissal - off the third ball of the innings - ended Royals' very slim hopes of making the play-offs on net-run-rate.

Despite having only pride then to play for, things did not get much better for Royals.

Skipper Sanju Samson - the competition's fifth highest run-scorer (484 runs) this year - was dismissed by Mavi in the next over, Morgan taking the catch, to leave Royals on 1-2.

That soon became 12-3 when Liam Livingstone sliced a rising delivery from Lockie Ferguson (3-18) to the leg side and was caught for six.

It capped a disappointing IPL campaign for Livingstone, who went to the UAE in rich form last month.

The 28-year-old England batter was top-scorer (348 runs) in the inaugural men's Hundred competition and also starred for England against Pakistan earlier in the summer, but has struggled for runs in the IPL.

The wickets continued to tumble for Royals, who fell to 35-7 after nine overs.

Royal Challengers Bangalore's unwanted record of the lowest total in IPL history - 49 all out against KKR in 2017 - was in danger of being broken.

But Tewatia - batting at number seven - saved Royals' blushes with 44 off 36 balls - clearing the rope five times and scoring more than half his team's runs.