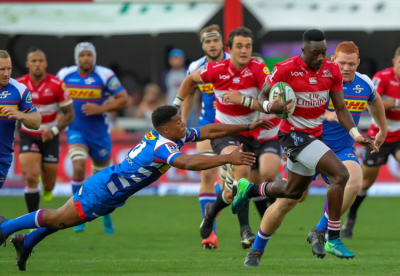 Stormers lock Adre Smith has been suspended for eight weeks after being found guilty of an act of foul play in his side's 34-18 United Rugby Championship defeat to Irish outfit Munster at Thomond Park last Saturday.

Smith had been cited after an alleged biting incident on Munster hooker Scannell occurred in the 45th minute of the match.

It was in the build-up to a try scored by Munster lock Jean Kleyn. Video footage showed Scannell and Smith tussling on the ground before the Munster player complained to the officials that he had been bitten.

Referee Andrew Brace asked for replays of the incident from his television match official (TMO) Brian MacNeice but replays showed no conclusive evidence.

The referee then told Munster captain Peter O'Mahony "if there's anything clear the citing officer will deal with it".

Although no evidence of any wrongdoing could be proven after recourse to the TMO and video replays, Smith was subsequently cited and faced a disciplinary hearing via video conference on Thursday.

As indicated by Munster head coach Johann van Graan after the game, Scannell was examined by the head of their medical team, and that is understood to have been submitted to the match commissioner.

Smith was banned for eight weeks as he "couldn't on the balance of probabilities prove that foul play had not occurred".

The URC statement read: "The player received a citing complaint under Law 9.12 – A player must not physically or verbally abuse anyone. Physical abuse includes, but is not limited to, biting, punching, contact with the eye or eye area, striking with any part of the arm (including stiff-arm tackles), shoulder, head or knee(s), stamping, trampling, tripping or kicking.

"The Disciplinary Panel, comprising of Sheriff Kathrine Mackie, Iain Leslie (both Scotland) and Janet Gedrych (Wales) upheld the citing after the player failed to prove on the balance of probabilities that foul play had not occurred and selected a low-range entry point.

"The Disciplinary Panel concluded that there was an act of foul play which merited a low range entry point. The player’s previous record and behaviour during the process were considered and mitigation of 30 percent was applied.

"As a result, the player has been banned for a period of eight games. He is free to play from midnight on Sunday, February 13th, 2022. The player was reminded of his right to appeal."

The Stormers, meanwhile, added on their official website on Friday that they would be appealing the verdict.

More in this category: « Is the Gypsy King ready for trilogy fight after chaotic camp? Hamilton to take 10-place grid penalty with new Mercedes engine. »
back to top