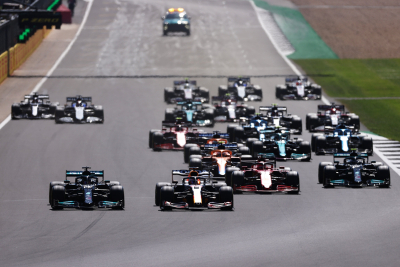 Lewis Hamilton will have a 10-place grid penalty at Sunday's Turkish Grand Prix but topped both Friday sessions at Istanbul Park.

Mercedes have taken a fourth engine - one more than is permitted - to reduce the risks of him suffering a failure during the tight championship run-in.

But he has taken only one power-unit component - the internal combustion engine - so escapes a full grid drop.

The aim is to lose as little ground to title rival Max Verstappen as possible.

The Red Bull driver trails Hamilton by two points in the championship after recovering from the back of the grid following his own engine penalty to finish second behind the seven-time champion in Russia at the last race.

Hamilton topped first practice at Istanbul Park, 0.425 seconds ahead of Verstappen, and also headed the time sheets in the second session, in which Ferrari's Charles Leclerc was second, 0.166secs behind the Mercedes.

Verstappen was 0.635secs off the pace in the second session, in which the understeer he was suffering in the first session had been replaced by oversteer.

Leclerc, who was third fastest in the first session, looked competitive all day in the Ferrari, which is fitted with an engine with the upgraded hybrid system to which he gave a debut in the last race in Russia.

Mercedes have made the decision to change Hamilton's engine for reliability and performance reasons, after the seven-time champion lost one of his three engines with a failure in practice at the Dutch Grand Prix last month.

Taking the fourth internal combustion engine gives them a bit more peace of mind, as well as overall performance, for the championship run-in.

The team based their decision on simulations of the races to come, trying to balance the negative impact of a penalty with the risk of reliability issues.

It was influenced by the fact that a grid penalty such as this is far less damaging than a failure in a race and a penalty at a subsequent one as a result.

Mercedes said they required only a change of internal combustion engine, and not that of any of the other components: the turbo, hybrid system, battery and electronics.

In the second session, Hamilton's team-mate Valtteri Bottas was third fastest, ahead of the Red Bull's of Sergio Perez and Verstappen, McLaren's Lando Norris and the Alpines of Fernando Alonso and Esteban Ocon.

More in this category: « Stormers to appeal 8-week ban for lock Adre Smith. Vodacom Bulls looking for a good 4G connection against Cardiff. »
back to top