Vodacom Bulls looking for a good 4G connection against Cardiff. 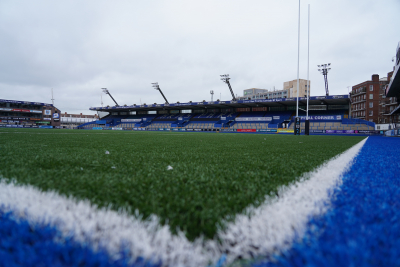 CARDIFF, Wales (8 October 2021) – The Vodacom Bulls will be presented with a new challenge on their Vodacom United Rugby Championship tour when they play their first match on a 4G synthetic pitch at Cardiff Arms Park against Cardiff Rugby on Saturday.

The United Kingdom's 4G pitches have been one of the main talking points amongst the four South African teams making their debuts in the competition, and where they've been faced with these new synthetic pitches for the first time.

Billed as the future of artificial grass, a 4G (which is not too dissimilar from its predecessor 3G) pitch is basically synthetic grass with a rubber infill, often on a sand base. Their pros and cons are a hotly debated topic amongst rugby players, and Vodacom Bulls coach Jake White has admitted it's added another dimension to their planning and strategy for Saturday's match.

"The most important thing for us is how we adapt to this new surface. It's another challenge for us on a different surface. This is the first time we're playing as a team on a 4G pitch, so it's a different test for us," he said on Friday.

"This sort of surface can challenge you in terms of attack and defence. The pace is very quick, so a lot of things change – the way you attack the breakdown, and the players you have on their feet because if you commit too many and the ball pops out and they get quick ball then you've got a problem because the game is so quick that you don't get to fill the field. That affects the decision making of when to go in and when not to go in, and to make sure we've got numbers on our feet from a defensive point of view. And then from an attacking point of view, it's to make sure we play as quickly as we can. Obviously the quicker you play the more you test the defence."

The Vodacom Bulls have spent the past week training on a synthetic pitch so they have some idea of what to expect against Cardiff Rugby.

"A lot of our players haven't played on this surface so part of our preparation this week has been training on a synthetic pitch, and we had the whole week to experience it. It's given us a feel for what it's going to be like and to prepare our scrumming and mauling, and seeing how the ball bounces as well. It's just a very different feel. The pace of the game increases because it's so even and flat, so players can really push themselves. You'd find that teams that play on this sort of surface regularly push tempo big time. They push the pace of the game in terms of outworking people as opposed to going through them, so the skills level also helps.

"If there are no external factors such as dew or inclement weather, then it's one of those pitches that helps with skill level and accuracy, and at the breakdown in terms of the ball being presented in the same way every time."

More in this category: « Hamilton to take 10-place grid penalty with new Mercedes engine. Absa signs four-year deal with RUN YOUR CITY Series. »
back to top