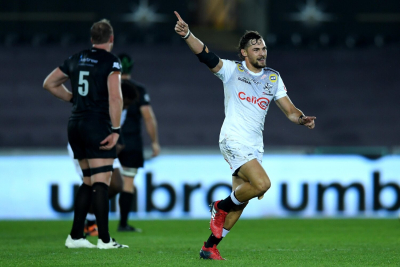 Boeta Chamberlain of Sharks celebrates scoring a drop-goal during the United Rugby Championship match against Ospreys on Friday. @GalloImages.

Sharks claimed their first United Rugby Championship victory by inflicting a first league defeat of the season on Ospreys.

A tentative first half saw two Gareth Anscombe penalties cancelled out by a pair of Boeta Chamberlain drop-goals.

Sharks shrugged off defeats by Munster and Glasgow while Ospreys had won their opening matches against Dragons and Cardiff.

Only wing Mat Protheroe offered any attacking intent against Sharks before he was brought off in the second half with a late Gareth Thomas try proving little consolation for an Ospreys side that made too many unforced errors.

Wales captain Alun Wyn Jones could not inspire his region when making his first Ospreys appearance of the season after captaining the British and Irish Lions in South Africa.

Fellow Lions lock Adam Beard had returned earlier than Jones with a couple of replacement appearances and also started against Sharks.

Centre Michael Collins and lock Bradley Davies were both missing through injury, while Wales prop Tomas Francis was a big loss after being a late withdrawal with a stomach bug with Tom Botha starting.

Anscombe opened the scoring with a penalty after Jones forced the mistake before Ruan Pienaar missed a long-range effort.

Pienaar intercepted a Webb pass before a length-of-the-field attack came to nothing, apart from a minor scuffle.

Sharks deservedly took the lead in the second-half through centre Ward after superb work from second-row Hyron Andrews, who collected a Chamberlain grubber kick.

Ospreys changed their front-row in an attempt to stop the Sharks forward and scrum dominance, but it had no immediate impact.

Sharks' confidence was rising and inevitably led to a second try for wing Potgieter after smart hands from the visiting backs.

A third Chamberlain drop-goal followed and his second direct from an Ospreys drop-out from their own line, while Pienaar added an extra three points.

More in this category: « Jorginho, Lionel Messi and Robert Lewandowski among nominees for Ballon d'Or. England cricket tour of Australia set to go ahead in December. »
back to top