Basetsana through to 3rd Round after overcoming Mozambique. 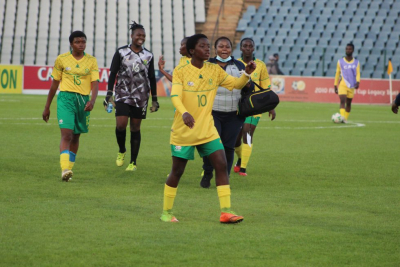 South African U20 Women’s National team (Basetsana), beat Mozambique 3-2 at Dobsonville on Friday, 8 October for a 4-2 aggregate win to progress to the next stage of the FIFA U20 Women’s World Cup qualifiers scheduled for Costa Rica.

Asanda Hadebe was the star of the day in the return leg by scoring a memorable hat-trick that booked Basetsana a ticket to the 3rd round of the qualifiers.

Captain Zethembiso Vilakazi who scored South Africa’s solitary goal in the first leg, was the chief provider for Hadebe’s all three goals.

Head Coach Jabulile Baloyi was happy to be through the next round but does not down play the fact that there is still a lot of work to be done ahead of the 3rd round of qualifiers.

"I’m glad we got our 3 goals but we conceded 2 unnecessary goals which could have been costly.  There were moments in the match that were very disappointing and the level of concentration is something we really have to work on.

"However, there are also positives to take. We are playing the football we want and with time we will become a great team," said Baloyi.

Basetsana will play Uganda in the next round in their quest to qualify for their first ever FIFA U20 Women’s World Cup. The dates and venues are yet to be confirmed.

More in this category: « England cricket tour of Australia set to go ahead in December. Bafana Bafana go four points clear in Group G,Big guns record wins. »
back to top