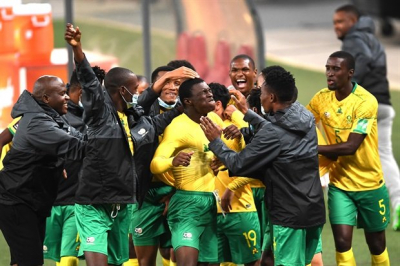 South Africa secured a 3-1 win over Ethiopia at the Bahir Dar Stadium on Saturday afternoon.

Bafana Bafana made three changes from the late win over Ghana, as Terrence Mashego, Tshegofatso Mabasa and Vincent Pule were brought to the fore but Pule got injured in the warm-up and his place was taken by Thabiso Kutumela.

Fasil Gebremikael could not keep out Teboho Mokoena's free-kick in first-half stoppage time to give Bafana Bafana the lead at the break in Bahir Dar.

Evidence Makgopa made the game safe for the visitors in the 91st minute after coming off the bench.

Hugo Broos' side, who failed to qualify for the Africa Cup of Nations, top the group with seven points.

"It was a difficult game on a very difficult pitch," said Broos.

"I said before the game that we don’t need a trophy for the best football playing team, we need the trophy for the team with the most character. We showed that character and mentality even when Ethiopia equalised. We fought for every ball and we won at last, and it is a great win."

"I don’t understand Ethiopia coming to play an important game on this pitch," added the Bafana coach.

"It is also not good for them. They are also a team that plays football and not kick and rush. But on this field you can do nothing else."

Bafana Bafana were set to return home immediately after the game in Bahir Dar, as they now prepare for another game against Ethiopia, this time at FNB on Tuesday.

Ghana, who have three points from their two games in Group G, host Zimbabwe later on Saturday.

Meanwhile Guinea's hopes of progressing to next March's play-offs took another blow as they were held to a 2-2 draw by Sudan.

Algeria, Cameroon and Egypt were among the top African sides which recorded victories in their 2022 Fifa World Cup qualifiers on Friday.

The Desert Foxes of Algeria maintained their lead at the top of Group A table after annihilating Niger 6-1 at home with Riyad Mahrez and Islam Slimani both grabbing a brace.

Algeria are level on points with second-placed Burkina Faso, who thumped Djibouti 4-0 away with Abdoul Tapsoba grabbing a brace in a one-sided match on Friday evening.

Cameroon, meanwhile, returned to winning ways in Group D when they thrashed Mozambique 3-1 at home with Geny scoring the visitors' consolation goal.

The Indomitable Lions remained second on the group standings despite their victory as leaders Ivory Coast claimed a 3-0 win over Malawi away from home on the same day.

Egypt climbed to the top of Group F standings after edging out Libya 1-0 at home with Mohamed Marmoush scoring for the Pharaohs on debut.

Elsewhere Angola recorded their first win in the second round of qualifying when they thrashed Gabon 3-1 at home in another Group F match and they moved up to the third place.

More in this category: « Basetsana through to 3rd Round after overcoming Mozambique. Tanzania win Cosafa Women's Championship Cup. »
back to top