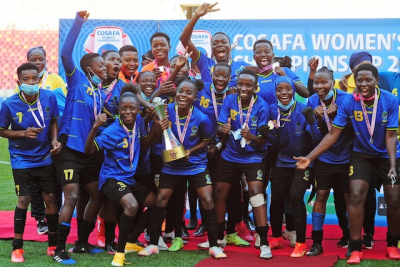 Tanzania celebrate with the trophy after beating Malawi 1-0 in the final. @BackpagePix.

Tanzania have been crowned 2021 Cosafa Women's Championships winners after a 1-0 victory over Malawi in the final at the Nelson Mandela Bay Stadium on Saturday.

The Tanzanians now hold titles in all the women's categories in COSAFA, Under-17, Under-20, and senior football.

It is heartbreak for Malawi, who made their first final but battled to make an impact against the organised Tanzanians.

The decisive moment in the decider came on 64 minutes when Enekia Lunyamila followed up a long-range shot that was spilled and fired into the empty net.

It was as much as Tanzania deserved, they controlled much of the game and lift the trophy having only conceded a single goal in their five games.

Meanwhile Banyana Banyana left the Nelson Mandela Bay Stadium without a medal after they suffered a 4-3 penalty shoot-out defeat against Zambia in the Cosafa Cup Women's Championship bronze medal match on Saturday.

The penalty shoot-out finally separated the two teams after the 1-all stalemate at the end of regulation time.

The match marked the first time that Banyana Banyana participated in a third-place play-off. Since the inception of the event in 2002, Banyana Banyana has played in every final.

Despite the prevailing strong wind, the players sensibly played the ball on the ground, and after 10 minutes, Zambia started reversing the flow of the game. Several of their front-runners went toe-to-toe with Banyana Banyana defenders, but although they threatened, they needed support to lend a much-needed finishing touch.

Just ahead of the first-half midway mark, the two goalkeepers Kaylin Swart (Banyana Banyana) and Catherine Musonda (Zambia) had brought off excellent saves, but that all changed in the 21st minute when Zambia were awarded a corner.

Patricia Lampi's corner landed plumb in the middle of the Banyana Banyana penalty box, and Swart moved off her line to gather. She missed completely, and Ochumba Lubandji out jumped the defence to head into the empty goals (1-0).

With this goal, Lubandji joined Banyana Banyana midfielder Sibulele Holweni at the top of the leading goalscorers list with four goals each.

Banyana Banyana staged a few counter-attacks, but none were telling enough to leave its mark. The best scoring effort for Banyana Banyana came in the 67th minute from substitute Gabriela Salgado who left her marker for dead before unleashing a shot from 25m out. Her effort was turned away for a corner.

Salgado's introduction added some spark to Banyana Banyana's attacks. She justified the faith in her with a well-struck free-kick into the Zambian penalty box, in the 76th minute. The ball spilt clear after Musonda and her supporting defence failed to gain control, and unmarked Holweni was handily placed to score (1-1).

After neither nation could find a winner in the final minutes, Zambia went on to clinch the win after defeating South Africa 4-3 in a penalty shoot-out.