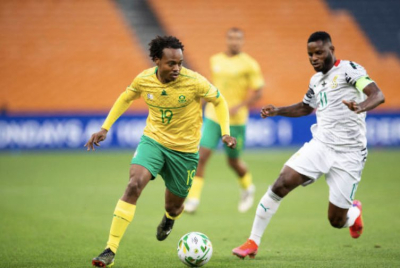 South Africa and Ghana secured vital wins on a busy day in Africa’s 2022 World Cup Qualification tournament, while Senegal and Morocco are on the verge of sealing progression into the final phase after dominant victories over Namibia and Guinea-Bissau respectively.

Senegal have opened up a five-point lead at the top of Group H after they crushed Namibia 4-1 in Thies in a night game, with Idrissa Gueye, Famara Diedhiou, Sadio Mane and Keita Balde getting their names on the score sheet.

The Teranga Lions can seal progression into the final round of qualifying (a playoff tie against a fellow group winner in March next year) if they can defeat the Brave Warriors in the return game in Soweto on Tuesday.

The key result from the afternoon saw South Africa take control of Group G with a 3-1 away win over Ethiopia in Bahir Dar, as goals from Teboho Mokoena, Mothobi Mvala and Evidence Makgopa allowed Bafana Bafana to move to seven points at the top of the log.

Ghana responded later in the day with a 3-1 of their own – over Zimbabwe at Cape Coast Stadium – to be just one point behind SA.

Goals from Mohammed Kudus,Thomas Partey and Andre Ayew saw the Black Stars to victory, and all but ended the Warriors' hopes of a first World Cup appearance.

The early evening also featured a 1-1 draw between Group H rivals Togo and Congo in Lome, with the Sparrow Hawks recovering from an early own goal by Jacques-Alaixys Romao to salvage a point thanks to Meme Placca’s second-half equaliser.

The first of two Matchday 4 Group I fixtures played on Saturday saw Guinea and Sudan draw 2-2 in Agadir, Morocco, with the Falcons of Jediane twice coming from behind to hold the Syli Nationale.

The 'hosts' led through Jose Kante and Mohamed Bayo, but Ahmed Mahmoud and Amir Kamal levelled for the visitors.

Morocco then opened up a five-point lead at the top of the standings with a 3-0 ‘away’ win over neatest chasers Guinea-Bissau in Casablanca, as strikes from Ayoub El Kaabi (two) and Aymen Barkok secured a third victory from as many matches.