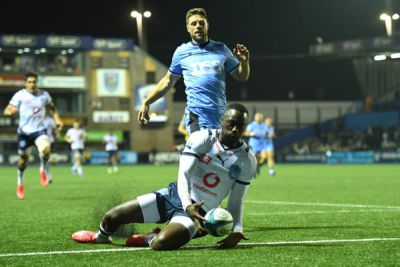 The dominant hosts led 16-3 at half-time thanks to Matthew Screech's try and three penalties from the boot of Rhys Priestland.

But Bulls turned the game on its head in the second half with 23 unanswered points.

This was only a third victory for South Africa's four sides in the first season of the new-look United Rugby Championship - and a second in Wales this weekend after Sharks beat Ospreys on Friday.

As for Cardiff, for all the attacking verve they demonstrated in a vibrant first half, they were left to rue a woeful second in which they were completely overpowered.

Their evening was made worse by an injury to Wales flanker Josh Navidi, whose first appearance of the season lasted just eight minutes as he was forced off with a shoulder injury.

It might have been a different story for the British and Irish Lions player, who almost marked his return with a try after less than two minutes, only to be tackled just short of the line with wing Owen Lane wide open to his right.

That overlap was typical of a bright start from Cardiff, whose backs and forwards combined fluently to build an early 13-0 lead.

The hosts played with width and pace and attacked with invention, Screech powering his way over from close range for the opening try between two Priestland penalties.

Even with Cardiff lock Seb Davies spending 10 minutes in the sin-bin for leading with his shoulder at a ruck, Bulls offered little threat beyond the occasional burst from wing Kurt-Lee Arendse.

A Smith penalty got the visitors off the mark but a third from Priestland after a muscular Cardiff scrum restored the home side's 13-point lead at half-time.

The tide turned in the second half, with Bulls rediscovering their strength up front to close the gap.

Smith's conversion and penalty brought Bulls within three points and they took the lead for the first time with an opportunistic try after an hour.

Wing Tambwe seized on Hallam Amos' loose pass near the halfway line, kicked ahead and outpaced the covering Priestland to touch down.

The try was eventually given after a lengthy check with the television match official to ensure Bulls' Harold Vorster had not knocked the ball on as he tackled Amos.

Smith converted the score and added another two penalties soon afterwards to put Bulls 26-16 up.

Cardiff were rattled and barely ventured into the Bulls' 22, with their only points of the second half coming from a Priestland penalty briefly reducing their lead to 26-19.

But it was Smith who had the final word with his fifth penalty of the match to seal a memorable first win of the season for Bulls at the third attempt.

Meanwhile Edinburgh were unable to record a second consecutive United Rugby Championship win at the new Dam Health Stadium after being held by Stormers.