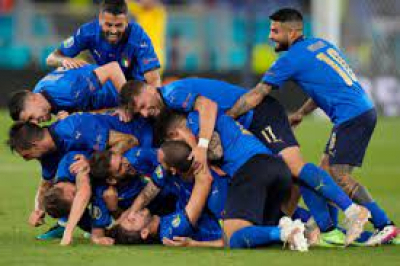 Nicolo Barella's thunderous strike and a penalty converted by Domenico Berardi proved enough to earn hosts Italy a 2-1 victory over Belgium on Sunday and third place in this year's Nations League.

It offered some consolation for the European champions, whose semifinal loss to Spain in Milan on Wednesday ended their world record 37-match unbeaten run.

Belgium hit the woodwork three times before pulling one back through Charles de Ketelaere late on.

They pressed for an equaliser but Italy, whose 37-game unbeaten run was ended by Spain on Wednesday, held on.

After a dull first half of the bronze-medal match, Barella sparked the game into life with a stunning first-time strike into the bottom corner from a corner.

Roberto Mancini's side doubled their lead from the spot when Thibaut Courtois' glove could only divert Berardi's effort into the top corner after Timothy Castagne had brought down the lively Federico Chiesa.

The Italy goalkeeper had earlier denied former Tottenham defenders Toby Alderweireld and Jan Vertonghen with smart saves to keep his side in front.

France and Spain meet in the Nations League final in Milan later on Sunday.