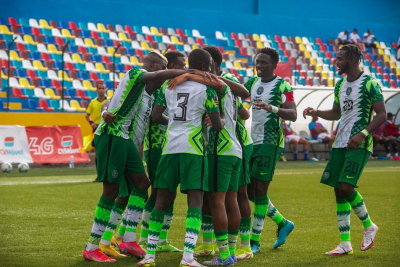 Nigeria got their revenge in a CAF second round 2022 FIFA World Cup qualifying match as they defeated the Central African Republic (CAR) 2-0 at Stade de la Réunification in Douala on Sunday.

The Super Eagles slumped to a shock 1-0 defeat against the same opponents in Lagos earlier this week, but redeemed themselves to move five-points clear atop Group C, ahead of Cape Verde's match at home to Liberia later this evening.

Shockwaves were sent through Nigeria following the defeat as pressure mounted on head coach Gernot Rohr but the West African nation delivered a timely response.

Leon Balogun atoned for his costly mistake in defeat to the Wild Beasts by opening the scoring in the 29th minute of the match in Cameroon. The defender provided a striker's finish after staying up-field and profited from a precise Chidozie Awaziem cross to fire the visitors in front.

The Super Eagles made it two before the break as defensive partner William Troost-Ekong found Victor Osimhen who finished with aplomb from close range to build on his impressive scoring record at international level.

This forced the hosts into a change of approach after the interval but Nigeria held firm and they will go into the November round of qualifiers holding at least a two-point lead with two matches remaining.

More in this category: « Italy edge Belgium 2-1 to finish third in Nations League. Dhoni steers Chennai Super Kings into final with tense win over Delhi Capitals. »
back to top