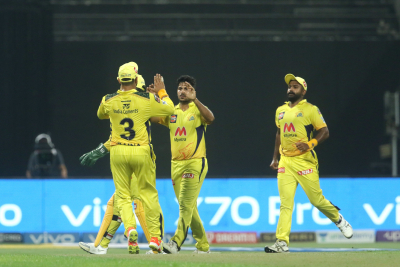 Chasing 173, a stunning cameo of 18 not out from six balls from captain MS Dhoni secured the win.

Despite Dhoni's heroics, there were also vital contributions from Ruturaj Gaikwad (70) and Robin Uthappa (63).

Earlier, Prithvi Shaw and Rishabh Pant starred for Delhi by making half-centuries and ensuring they posted a competitive total of 172.

But despite losing Faf du Plessis in the first over, CSK recovered and were in firm control of the chase at 113-1 before the Capitals forced their way back into the game by chipping away with regular quick wickets.

Curran, playing his first match since the IPL restarted in September, was impressive and even removed England team-mate Moeen Ali with the first ball of his final over to swing the game back in his side's favour.

But Dhoni hit three fours to steer CSK to their ninth IPL final.

Although Delhi lost, they will get a second chance to reach the final when they play the winner of the eliminator. That is between Eoin Morgan's Kolkata Knight Riders and Virat Kohli's Royal Challengers Bangalore and takes place on Monday 11 October.

Former India captain Dhoni had been under pressure, with his form for CSK in this year's IPL average at best. Before this game, he had just 96 runs from 14 innings.

But highly regarded for his calmness under pressure, who better to have at the crease in this situation?

Needing 13 from five balls, having just seen Ali dismissed from the first of the over, for Dhoni, it was no big deal.