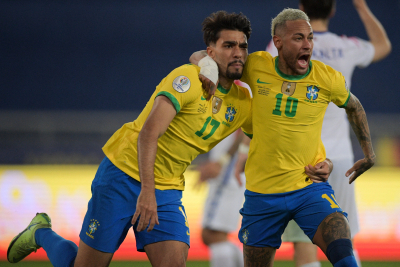 Brazil dropped points for the first time in their World Cup qualifying campaign with a 0-0 draw in Colombia.

The Copa America runners-up had won all of their previous nine qualifiers for Qatar but were nowhere near their best in Barranquilla on Sunday.

Brazil had the best chances but efforts from Manchester United's Fred, Leeds winger Raphinha and Ajax's Anthony all failed to register.

The result means Brazil are nine points clear at the top of the group.

Brazil looked the more likely to get on the scoresheet, especially after the introduction from the subs bench of the lively Raphinha after an hour for his second cap.

The best chance of the match fell to Anthony after a superb cross from Raphinha with five minutes to go. A fizzing inswinging cross from the right was met by the 21-year-old, who forced an athletic save from Napoli keeper David Ospina.

Brazil had been on top in the first half with Paris St-Germain star Neymar dropping deep and dictating many of their best moves.

But the second half was a scrappy affair with both sides failing to keep their shape.

Colombia had two main chances to get on the scoresheet in the second half, but Juan Quintero's well-hit drive from long range was saved by Liverpool's Alisson before Raphael Borre blazed over with seconds to go.

Colombia host Ecuador on Thursday while Brazil play Uruguay on Friday in Manaus. The top four sides in the group qualify automatically for the World Cup.