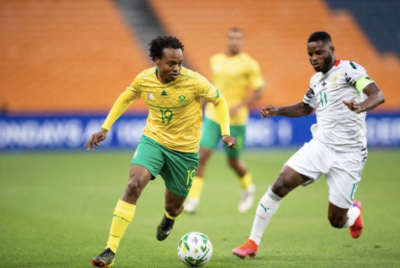 Bafana Bafana have confirmed the number of spectators allowed to enter FNB Stadium on Tuesday for their 2022 FIFA World Cup qualifying clash against Ethiopia.

It has been 18 months since spectators were allowed to watch live sports matches in the country due to the Covid-19 pandemic.

It was confirmed on Monday that 2 000 vaccinated fans will be allowed to attend the much-anticipated encounter.

"A total of 2 000 fans will be allowed to watch the Bafana Bafana v Ethiopia match on Tuesday, 12 October 2021," read a statement on the official Bafana Bafana Twitter account.

"The Cogta Ministry has approved that a limited number of spectators will be allowed back into the stadium. The website to apply for tickets will go live this afternoon."

Bafana Bafana squad returned to South Africa on Sunday after a 3-1 victory in the away leg in Ethiopia on Saturday.

South Africa (7 points) remain in first place in Group G ahead of second-place Ghana (6) after the Black Stars' win over last-place Zimbabwe on the same day.

Meanwhile, Ethiopia remain in the third position with three points after three games ahead of the return leg in South Africa at FNB Stadium on Tuesday (kick-off is at 18:00).