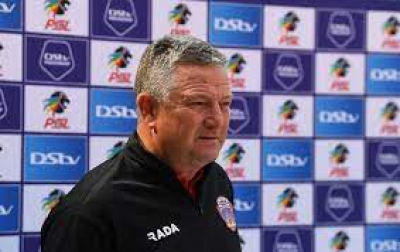 Chippa United have issued an update on the future of Gavin Hunt as the club's head coach.

This morning, Chippa United owner and chairman Chippa Mpengesi penned an open letter to the club's supporters in which he addressed the team's early performances in the DStv Premiership this season.

United currently sits on 13th spot in the log standings after winning just one of their opening six matches of the campaign in a run of form that has seen head coach Gavin Hunt come under increased pressure.

However, Hunt has now received the backing of Mpengesi who has thrown his full support behind Hunt to turn things around.

"We are now six games into the new season. So far, this season has been a mixed bag of fortunes for our #ChilliBoyz – as our team is affectionately known,” Mpengesi said in a letter to the supporters released by the club.

"As you probably know we have only won one game, drawn two and lost three. I will be the first one to admit that this is not a pretty picture and those of you that are worried about this, are justified.

"But those of us who have been with the team since pre-season and have seen what the coach and the technical team have been trying to drill into the boys, are not as worried as those, whose only interaction with the team has been through watching our games on television.

"This is because we have seen the amount of work that has gone into improving this team. We have also seen how the boys are responding to what the coaches want from them. Everyone has been putting in a shift.

"In my last letter to you, which was published ahead of our opening game of the new season, I wrote that as management and owners of this team, we have been very impressed with what the coach and his technical team had achieved in the short space of time that they have been with us.

"And as management and owners of the team, we see and acknowledge this. This kind of commitment has really warmed our hearts and it makes us very happy. We are confident that, very soon, our fortunes will change for the better – setting ourselves on a course to success.

"I wrote about my trust in coach Gavin Hunt and I committed to doing everything in my power to support him and his technical team and to make sure that they have everything they need to succeed in their mission. I still stand by that commitment.

"The coach has our full support. We want to see him and the players succeed. So I urge all of you to be patient. Patience is important as it is a prime mediator of success in any sport, especially team sports like soccer. As owners, we are in this thing for the long haul and we are not looking for quick fixes at all."