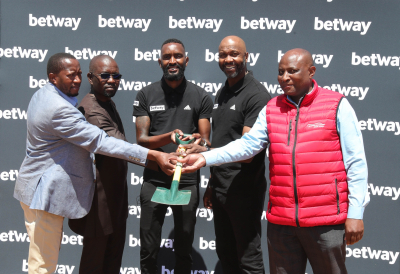 The community of Orlando and surrounding townships of Soweto are set to benefit from a newly formed partnership between Betway South Africa, City of Johannesburg and Stadium Management South Africa (SMSA).

As part of its Socio Economic Development programme, Betway South Africa and all its stakeholders officially broke ground at the defunct Orlando East Grounds on Monday, 11 October to signify the commencement of a three-month facility refurbishment project.

Aware of the dire state of the facility, Betway has for the past few months been working closely with all its stakeholders, putting plans in place to refurbish the facility into a multi-purpose sport complex as part of its tireless efforts of positively impacting community sports while also contributing to creating a safe environment.

The SOD-turning ceremony, which officially marks the first step of constructing the multipurpose facility that is set to boast a synthetic football field, basketball court, and two netball courts which will also serve as five-a-side fields, is set to be unveiled in December this year.

Speaking from the Orlando Grounds, Betway SA Marketing Manager, David Rachidi described the project as a bold and decisive step taken by the brand in demonstrating its true commitment to being a caring brand.

"Through our various initiatives, we have successfully demonstrated our commitment to being a caring brand and aiding community sport development. Today marks yet another important milestone in Betway’s continued efforts of positively impacting lives through community sport development. The refurbishment of these grounds will, without a doubt, afford aspiring athletes an opportunity to express their talent, in what we’re confident will be a safe and modern recreational facility for the community," said Rachidi.

In addition to maintaining the facility, SMSA will be extending its SMSA Training Academy to the project where locally based members of the community will undergo an accredited training programme through the SMSA Training Academy. Graduates of this programme will then be deployed to the venue in a bid to address the shortage of skills and increase chances of employment.

Also present on the day was Betway brand’s ambassador, Lucas Radebe, among other high-profile dignitaries from the City of Johannesburg and the community, who all heaped heartfelt praises on Betway for embarking on such a life-changing project.

Further details on the usage of the facility will be announced in due course.

More in this category: « Black Stars goes top of Group G with narrow win in Harare. South Africa complete Ethiopia double to go top of Group G. »
back to top