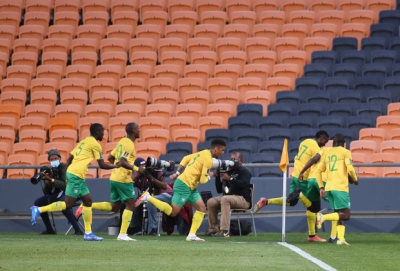 Coach Hugo Broos made four changes to the team which faced and defeated Ethiopia 3-1 in Bahir Dar on Saturday with Yusuf Maart, Njabulo Ngcobo, Victor Letsoalo and Evidence Makgopa being the new faces in the Bafana starting line-up.

The decisive goal at FNB Stadium came early in the encounter. An own goal from Bernard Parker famously steered Ethiopia to victory eight years ago and ironically enough, the man who scored for the Walia Ibex in that match - and also this past weekend - put the ball beyond his own goalkeeper in the 11th minute.

Kebede, who is well known to South African football followers, inadvertently directed the ball past Fasil Gebremichael after Yusuf Maart had picked out Letsoalo at a corner-kick.

Ethiopia ended the game strongly and came close when Abubeker Nassir charged down Rowen Williams' attempted clearance with 10 minutes of regulation time remaining. Luckily for the Bafana Bafana skipper the deflected ball bounced wide goal, and in the end South Africa held on for all three points.

The victory saw South Africa climb to the top of the group standings - a point above second-placed Ghana with two matches left which will be played next month, while Ethiopia and Zimbabwe's hopes of qualifying for the World Cup finals ended.

Before the game, there was confusion as fans without tickets argued that they should be let in as they meet the vaccination requirements, arguing they were told they could collect once they got to the ground.

Security, however, stop their ground as they were not allowed in.

The game was part of the pilot project that saw fans return to a stadium for the first time in 18 months, which required vaccinated supporters to show their cards at the point of entry before undergoing temperature checks, and then given their tickets to enter the stadium.

Meanwhile Liverpool star Mohamed Salah helped Egypt to a 3-0 World Cup qualifying triumph over closest rivals Libya on Monday that puts them on the brink of winning Group F and reaching the final elimination round.