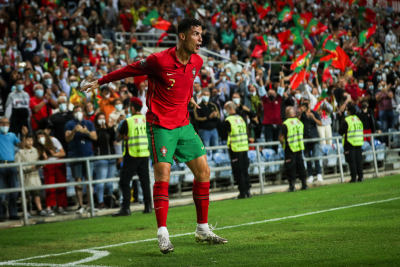 Cristiano Ronaldo scored a hat-trick as Portugal recorded an emphatic World Cup qualifying win over Luxembourg at the Estadio Algarve.

The victory leaves Portugal second in Group A, a point behind Serbia who they host in their final game.

Ronaldo knocked in two penalties and rounded off the scoring with a header as he recorded his 58th hat-trick for club and country.

Bruno Fernandes and Joao Palhinha added the other goals.

Fernandes superbly drove a low shot into the bottom-right corner as the hosts went 3-0 up inside 18 minutes.

Fernandes, who scored Portugal's third goal of the evening, was full of praise for his side's performance. "Scoring always helps regardless of whether it's early or not. We knew that Luxembourg, as time went by, would close themselves back and we had to start strong. That's what we did.

"I think we had a complete game overall and the most important thing was the result."

However, all the headlines will rightly belong with his Manchester United team-mate who now has 115 international goals.

Portugal travel to the Republic of Ireland in their penultimate Group A match before facing Serbia.

Meanwhile Scotland got a desperately-needed 1-0 win over the Faroe Islands, meaning they need one more victory from their last two games to secure a playoff spot as they seek to reach a World Cup finals for the first time since 1998.

Lyndon Dykes scored for the Scots for the fourth game running, as he connected untidily with a Nathan Patterson cross to finally break the resistance of the minnows.

Elsewhere Switzerland stayed in contention for Qatar when they eased to a 4-0 win in Lithuania with Breel Embolo scoring twice.

The Swiss are equal with Italy on 14 points in Group C, but second on goal difference.

Ukraine were held to a goalless draw by Bosnia-Herzegovina and lie second in World Cup holders France's Group D, just a point ahead of Finland.

France, who won the Nations League on Sunday by beating Spain, will not be in action again until November.

More in this category: « South Africa complete Ethiopia double to go top of Group G. Senegal and Morocco through to the World Cup playoffs. »
back to top