Senegal and Morocco through to the World Cup playoffs. 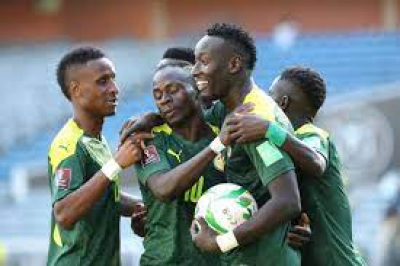 It proved a good day for away teams on the African continent in CAF second round 2022 Fifa World Cup qualifying action on Tuesday.

Five of the six matches ended in favour of the away side with South Africa's 1-0 win over Ethiopia the only win for a home nation, in what was the final day of qualifying matches for the month of October.

Senegal became the first side to book their spot in the third round of qualifying for Qatar 2022 following a 3-1 win over Namibia. Famara Diédhiou bagged a hat-trick for the Lions of Teranga.

Morocco duly followed them into the playoffs later in the evening with a 4-1 thumping of Guinea. Selim Amallah scored a brace in a commanding win for the Atlas Lions who like Senegal have yet to drop a point after four rounds of fixtures.

With two games to go, it is still all to play for in Group G where South Africa lead the way by one point over Ghana.

Thomas Partey fired the Black Stars top of the group with a 1-0 win over Zimbabwe in Harare, but a Getaneh Kebede own goal at FNB Stadium took Bafana Bafana back up to the No 1 spot.

Elsewhere, reigning African champions Algeria thumped Niger 4-0 to move level on 10 points with Burkina Faso in Group A with goals from Riyad Mahrez, Aissa Mandi, Ismael Bennacer and Baghdad Bounedjah. The two nations are set for an epic battle on matchday six next month.

Togo were also able to claim an away win albeit a mere consolation with Senegal already qualified from Group H. Kevin Denkey scored the winner for the Sparrowhawks in a 2-1 victory over Congo in Brazzaville.