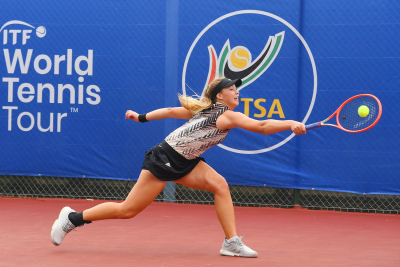 Centurion, 13 October 2021 - Talented young players from around the country will converge in Gauteng next week, as they battle it out for top honours in the National Finals of the BNP Paribas RCS Rising Star Tennis campaign, to be held at Arthur Ashe Tennis Centre in Soweto and Groenkloof Tennis Club in Pretoria between 22-24 October 2021.

Closing out another successful series, all 52 teams competing in the National Finals had to work hard through multiple rounds to earn their places.

The second edition of the BNP Paribas RCS Rising Star Tennis programme started with over 3 000 players turning out in 30 district tournaments, followed by provincial playoff events across South Africa.

The series also expanded in multiple ways this year, including secondary schools and a wheelchair tennis competition for the first time.

A new phase-feeder programme was also introduced, along with virtual masterclasses for players, and the opportunity for kids to interact with BNP Paribas RCS Rising Star Tennis ambassadors Kevin Anderson and Kholo Montsi.

In line with programme objectives - providing tennis access to children, targeting hundreds of schools across the country, including schools in historically disadvantaged communities in South Africa - tennis activations were held in Atteridgeville, Gqeberha and Polokwane.

Among the 52 teams contesting the National Finals, 36 have qualified through lower divisions in the primary school and high school divisions; eight will be wildcard entries; and eight will compete for the wheelchair tennis title.

On the second day of the National Finals, programme ambassadors Kgothatso Montjane and Montsi will conduct coaching clinics to impart their skills on the nation's future stars.

The last day of the BNP Paribas RCS Rising Star Tennis National Finals will be live streamed on the Tennis SA YouTube channel.

More in this category: « Athletics South Africa embarks on massive vaccination drive. Uefa to hold hearing into unrest during Wembley final. »
back to top