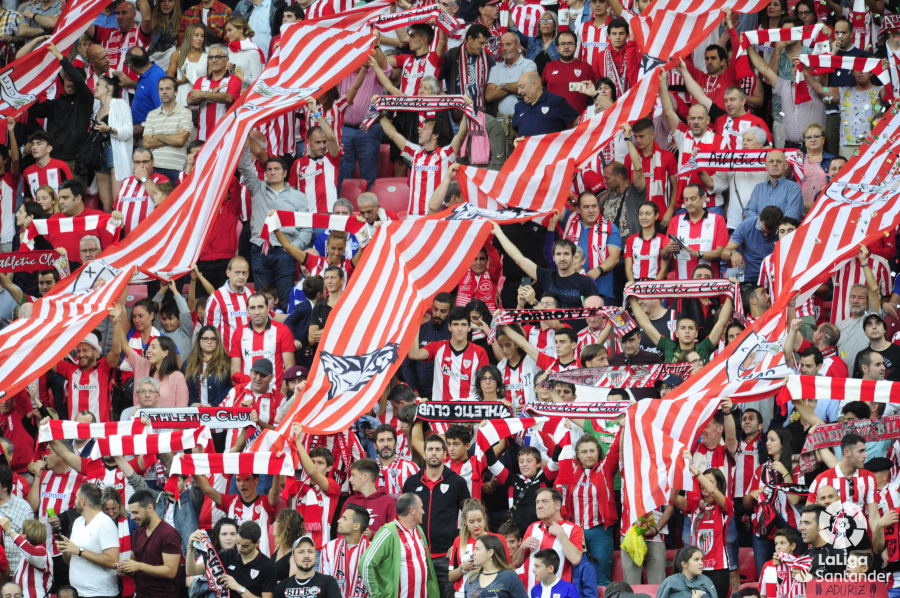 An initiative from clubs in the north of Spain is already spreading to other clubs across LaLiga Santander. The objective is to make it easier for supporters to travel to away games, developing respect between fanbases.

There is extra reason to look forward to the derbies across LaLiga Santander this season, as Athletic Club, Real Sociedad, SD Eibar, Deportivo Alavés and CA Osasuna have agreed to set away ticket prices at €25 for the matches between these teams.

What is more, a trend has been created that looks set to catch on with many more clubs in the division.

A local derby is always a memorable occasion in Spain and now visiting supporters can make the short trips to San Mamés, the Reale Arena, Ipurua, Mendizorroza and El Sadar at more fan-friendly prices.

“We want to create a great atmosphere at each one of our derbies, as you could already see when we welcomed Real Sociedad and Alavés,” is the message from Athletic Club, which has already hosted two Basque derbies this season. “We also want our supporters to be able to go and see their team away from home in a way that isn’t so costly.”

The main objective of the collaboration isn’t to increase attendances but the desire to encourage a philosophy of union, bringing fans from different regions together to support their teams.

“It makes it easier for visiting fans to travel to matches as special as the derbies,” said SD Eibar’s communications director Unai Artetxe, while also pointing out that the savings made could encourage fans to spend longer in the other club’s city and to share a meal together before or after the game.

“We want to develop a good atmosphere between the fans from different teams,” is the stance from Real Sociedad. Due to the redevelopment work at their stadium over the past couple of years, the San Sebastián club hasn’t been able to offer tickets to away fans, but now it expects this initiative and the increase in their stadium’s capacity to bring large away fans to the new Reale Arena.

“The Basque derbies are dates that fans mark in red on their calendars as the healthy rivalry between these clubs creates a unique atmosphere at these games,” explained Irati Lauzurica, the ticketing manager at Deportivo Alavés. “There are meet-ups, lunches and activities between fan groups. It’ll be good for this atmosphere to be seen through the TV as it’ll demonstrate the relevance, interest and attractiveness of these matches.”

The new agreement is particularly exciting for CA Osasuna, the Pamplona-based club that has just returned to LaLiga Santander after winning the second division of Spanish football last season. Construction work at its El Sadar stadium this season means that it’ll be difficult for this initiative to lead to huge away fans at the ground this year, but the club is thinking long term. “We hope that in the future we maintain the tradition of large away fans that are good for the club and the city,” said club communications director Santiago Zuza.

Those at CA Osasuna are even thinking about away fans as they improve their stadium. “We’ll assign a prime area to away fans and we’ll also have spaces for people with mobility issues, as well as improving the access points and services,” added Zuza.

An arrangement that can be extended to other clubs. While this agreement has been struck between five neighbouring clubs, similar deals are already being rolled out across Spain. “It could be the start of a series of arrangements between different LaLiga clubs so that attendance at stadiums is as high as possible, with the priority being on the fans,” is the message from Real Sociedad.

Athletic Club already has a similar arrangement with Celta Vigo, while CA Osasuna has pacts with Real Betis, Levante UD and Villarreal CF. It’s clear that LaLiga and its clubs are keen to work towards a future where respect between fanbases is developed and highlighted.

“These types of measures help to show that the fans are important in football,” Zuza noted. We must welcome all those who want to enjoy football in our stadiums.”

Tweet
More in this category: « Cape Town Blitz in contention for the playoffs after Dale Steyn produced best figures of Mzansi Super League 2.0. Milutin "Micho" Sredojevic has been sacked by the Egyptian giants Zamalek. »
back to top