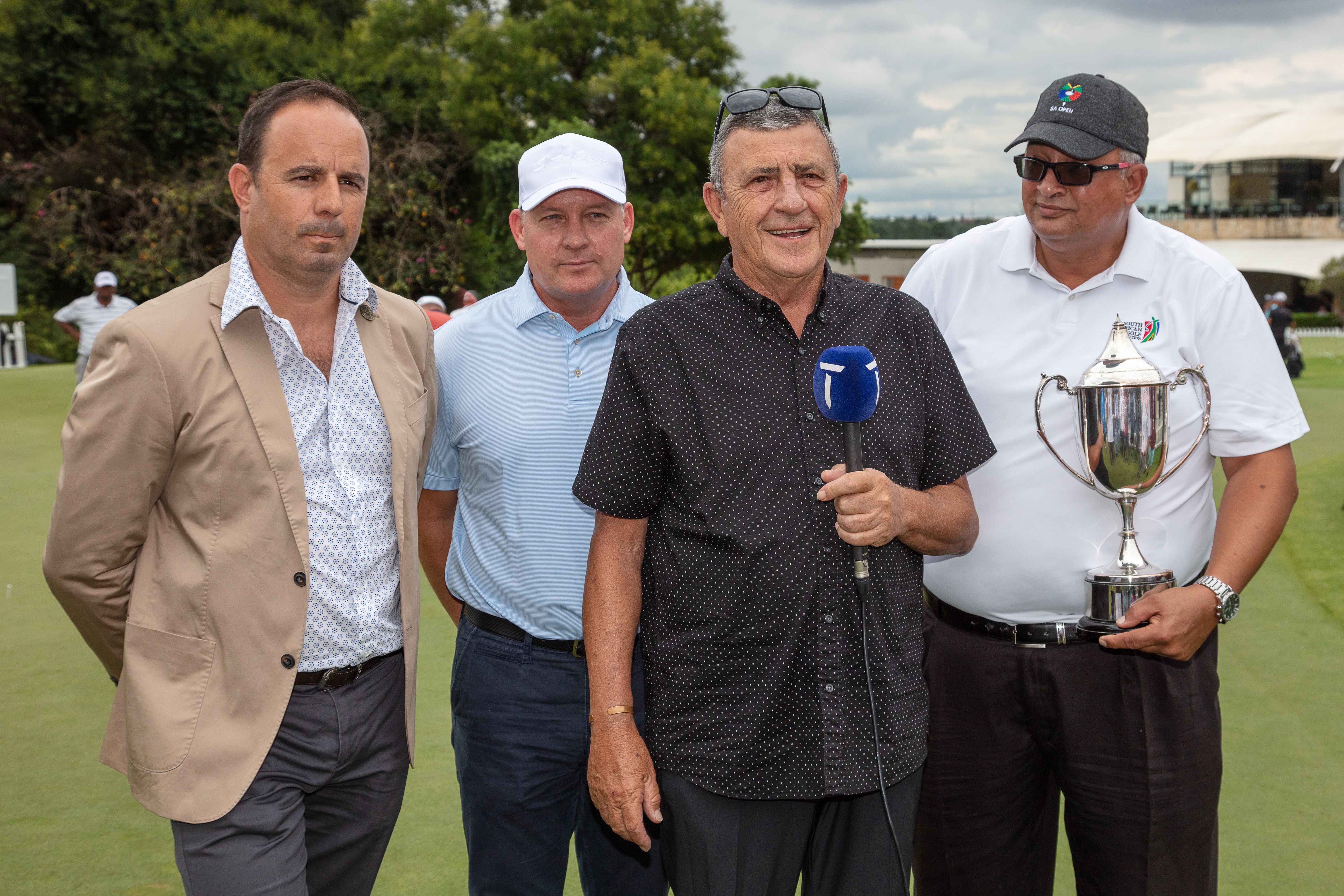 Photo (from left to right): Ivano Ficalbi, Chief Executive of the PGA of South Africa; Grant Hepburn, Chief Executive Officer of GolfRSA and Managing Director of the South African Golf Development Board (SAGDB); Selwyn Nathan, Commissioner of the Sunshine Tour; and Naadir Agherdien, President of the South African Golf Association (SAGA), at the announcement of the Denis Hutchinson Challenge Trophy at Randpark Golf Club on Saturday. Credit: Sunshine Tour.

Denis Hutchinson's immense contribution to golf will be celebrated through a new tournament in his honour and in partnership with the Sunshine Tour, PGA of South Africa, GolfRSA and the South African Golf Association (SAGA).

The Denis Hutchinson Challenge Trophy will be played at Hutchinson's home course of Royal Johannesburg and Kensington Golf Club on a date still to be announced, and it will feature 10 Sunshine Tour professionals and 10 PGA of South Africa professionals competing as a team against a 20-strong GolfRSA amateur team in an annual challenge match.

Selwyn Nathan, the Commissioner of the Sunshine Tour, made the announcement during the third round of the South African Open hosted by the City of Joburg at Randpark Golf Club on Saturday.

"This year is the 60th anniversary of Denis Hutchinson winning the South African Open as an amateur. Between all of us as the bodies representing South African golf, we wanted to celebrate this and build a legacy for Hutchy in years to come. Hutchy is a really special man. He is the voice of golf around the world. As a player he has been able to transfer the skills he had to many professionals and amateurs, and for us to have someone as special as this in South African golf to honour is a great privilege."

Grant Hepburn, the Chief Executive Officer of GolfRSA and Managing Director of the South African Golf Development Board (SAGDB), said they are delighted to be part of a tribute to a person whose influence in South African golf reaches all spheres of the game.

"I grew up listening to Denis commentate on television. He's done so much for golf, and what he means for golf in our country is huge. We are so fortunate in South African golf to be able to work closely together with all of the golf bodies, and the Denis Hutchinson Challenge Trophy will further solidify that unity that exists in our golf while at the same time celebrating an amazing man who is leaving an incredible legacy in South African golf."

"Denis Hutchinson represents everything of what we want our leading amateurs to be, both on and off the fairways. He is a true inspiration for our amateurs. An event like this will also give our amateurs an opportunity to test themselves against the professionals and see where their own games stand."

"Any PGA member who has qualified since the 90s will have Denis Hutchinson's signature on his certificate of qualification. Denis has always been somebody our members have always looked up to not just for what he's achieved as a golfer but also because he always has time for our members. I think this trophy will be played in exactly the kind of spirit that reflects Denis and his love for the game of golf."

Tweet
More in this category: « Mamelodi Sundowns have qualified for the CAF Champions League knockout stage after defeating USM Alger. Liverpool hold on to beat Spurs and make it 20 wins from 21 matches. »
back to top