Stuart Broad recalled to England side for 4th Ashes Test against Australia in Sydney. 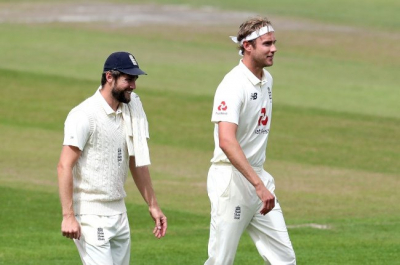 Bowler Stuart Broad has been recalled by England for the fourth Ashes Test against Australia in Sydney.

Broad, 35, replaces fellow seamer Ollie Robinson, who has a minor shoulder issue, in the only change to England's XI from last week's third Test defeat.

Broad has played just once so far in the series,which Australia hav won with two Tests to spare after earning three dominant victories.

Usman Khawaja returns for the hosts. Play starts at 23:30 GMT on Tuesday.

Khawaja will come into the middle order for Travis Head, who is isolating following a positive Covid test.

Fast bowler Scott Boland keeps his place after coming in for his Test debut in Melbourne and producing a player-of-the-match performance.

Broad earned his 150th England cap in the second Test - the day-night match in Adelaide in which he took 2-100 - but was left out of the England side on seamer-friendly pitches for the first and third Tests.

"I've been in contact with Spoons [Silverwood] throughout regarding team selection, as well as keeping him in the loop with what's been going on, but obviously myself and Joe Root are here on the ground," he said.

"We're looking at the surface and assessing our bowlers coming into it. From that point of view, it felt a bit of a risk going in with a couple of guys carrying niggles so it was right to bring Stuart back in.

"I've got a couple of caged tigers coming into this match, Ben Stokes being one of them. Stuart is another."

Khawaja will play in his first Test since August 2019, when he featured in the third Ashes Test at Headingley, which England won by one wicket because of Ben Stokes' match-winning century.

The 35-year-old was named in Australia's 15-man squad for the first two Tests but did not make the team in Brisbane or Adelaide.

Josh Hazlewood is still suffering from a side strain sustained in the first Test but captain Pat Cummins said the fast bowler would probably be fit to play in the fifth Test in Hobart from 14 January.

"It's no secret, if Joshy Hazlewood was available, he was going to play, he's been a brilliant bowler for us for a long time," said Cummins.

"It would have been a real shame to see Scotty not play this week after his efforts last week. It's unfortunate for Joshy but I'm really glad [Scott] gets another crack out here."