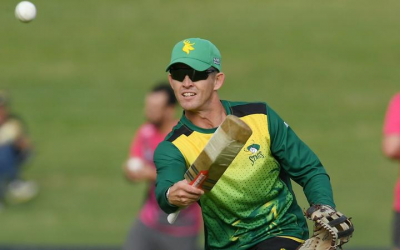 Heinrich Malan has been named as Ireland men's next head coach.

The 40-year-old South African signed an initial three-year deal that will see him succeed Graham Ford, who stepped down in December after four years at the helm.

Malan is the current head coach of the Auckland Aces having previously worked as New Zealand's assistant coach and fielding lead.

He is set to take up his new role in March subject to work permit approval.

"It's very humbling and a huge honour," Malan said.

"We have an exciting squad that has demonstrated that they have the ability to compete with the best players around the world. It is an exciting challenge and something that we, as a family, are really looking forward to."

Ireland are currently preparing for their three-match ODI series against West Indies which is set to begin on Saturday in Jamaica.

Under Ford's leadership the side achieved some memorable results, most notably one-day wins over England and South Africa, and also made their debut as a Test team in 2018.

However his four-year reign ended in disappointment as the side failed to make it out of the group stages of the T20 World Cup in the UAE having won just one of their three matches.

"My coaching philosophy has certainly evolved over time and I am very keen to get to know this group of players and staff to collaboratively shape our environment through the way we want to operate on a daily basis," said Malan, who played first class cricket in South Africa between 2005 and 2009 as a right-handed batter and a medium-fast bowler.

"The 'wheel' in Irish cricket is turning nicely for the stage it is at, but this point in time is a great opportunity to review what - and how - we are operating to not only grow the wheel, but make that wheel turn quicker."