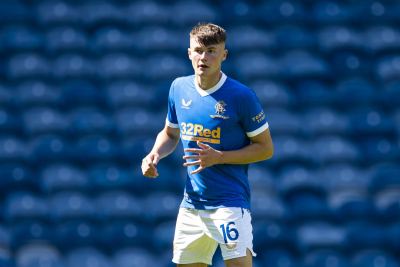 Everton have completed the signing of Scotland right-back Nathan Patterson from Rangers on a five-and-a-half-year deal.

The 20-year-old moves to Goodison Park for an undisclosed fee.

It was an easy choice to sign. This is a massive club with huge history and the fanbase is tremendous," he said.

Speaking to Everton TV, Patterson added: "Obviously we aren't in the place where we want to be right now but we can definitely get there with the talent in the changing room and staff here, and I have full belief we can do that."

"It was also great for me knowing the manager really wanted me here and that made my decision. When a club really wants you, it makes your mind up early on.

"I wanted to come here from the very start. I'm delighted to be here and really looking forward to playing in front of the fans at Goodison.

"Long-term, I want to nail down a starting position and win some trophies to make the fans proud."

Patterson - who will wear the number three jersey at Everton - had started in just two of his six Scottish Premiership appearances this season, with captain James Tavernier the Rangers' first-choice right-back.

He made his Scotland debut last June during a 1-0 win over Luxembourg before scoring his first goal for the national side against Moldova in November.

Everton are 15th in the Premier League and eight points above the relegation places following a run of one win in their past 12 league games.

More in this category: « Djokovic will defend Australian Open title after receiving medical exemption to play. Pujara,Rahane hold fort as India lead by 58 runs at stumps. »
back to top