Pujara,Rahane hold fort as India lead by 58 runs at stumps. 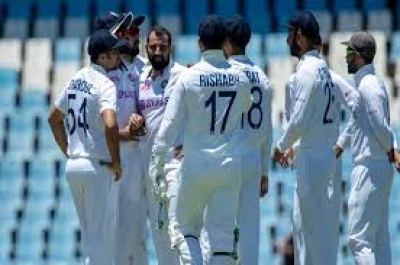 The second test between the Proteas and India was firmly in the balance by the end of play on day two at the Wanderers in Johannesburg on Tuesday with India on 85 for two in their second innings, holding a slender lead of 58 over the hosts.

Indian medium pacer Shardul Thakur was the star of the day, claiming career-best test figures of 7-61 to help bowl the Proteas all out for 229 shortly after tea, a lead of 27 runs on India’s first innings.

The visitors looked in the mood to bat positively as they scored at over four runs to the over, scoring regular boundaries in their second innings but lost two wickets along the way.

Stand-in captain KL Rahul (8) was first to fall as he edged a Marco Jansen ball on off stump to Aiden Markram at second slip with him taking a smart low catch just off the turf with India on 24 for one.

Mayank Agarwal (23) was looking in good nick having hit five boundaries when he completely misread a Duanne Olivier in-swinger and offered no shot to be trapped in front and sent on his way by the umpire, as India slipped to 44 for two.

The under-fire Cheteshwar Pujara (35 not out off 42 balls) counter attacked, hitting seven fours over the final few overs as he shared in an unbeaten 41-run third-wicket stand with Ajinkya Rahane (11 not out) to take them to stumps.

After the tea break the Proteas resumed their first innings on 191 for seven, with Keshav Maharaj (21) and Jansen (21) quickly taking them past India’s first-innings score of 202 all out, before Maharaj was bowled by Jasprit Bumrah with the score 217 for eight.

Jansen struck a few lusty blows before he was caught off a top edge by Ravichandran Ashwin, while Lungi Ngidi edged his first ball to keeper Rashabh Pant as they became Thakur’s sixth and seventh scalps of the day.

Earlier in the day at tea honours were basically with the Proteas on 191 for seven in their first innings at the break.

It was another display of the batsmen dominating at first before the bowlers came back towards the break as the Proteas got off to a good start after lunch, with Temba Bavuma (51) and Kyle Verreynne (21) starting well, before a flurry of wickets brought the Indians back into the match.

After three late strikes had reduced the Proteas to 102 for four at lunch, Bavuma and Verreynne both had yet to score when they resumed the innings, but got off to a great start as both batsmen looked to play positively.

Bavuma brought up the Proteas' 150 with a lovely straight drive down the ground for four off Bumrah, while a single from Verreynne off Ashwin in the next over brought up their 50 partnership.

With the hosts looking odds on to take a solid lead, Thakur’s dream test continued as he returned to make the vital breakthrough again, after he took all three wickets to fall in the first session.

He trapped Verreynne LBW with a ball that jagged back off the surface to hit him in front with the score 162 for five, before Bavuma went on the attack in the next over, smashing Ashwin for a four and a six.

In the next over from Thakur, Bavuma edged a ball through the vacant third slip region for a boundary to bring up his half century, but then got caught down the leg side by keeper Pant off the next ball trying to glance it to fine leg.

In the following over Kagiso Rabada popped an easy catch to Mohammed Siraj off the bowling of Mohammed Shami to fall for a sixth-ball duck, leaving the Proteas on 179 for seven, having lost three wickets for 17 runs.

Maharaj (11 not out) hit a couple of boundaries as he and Jansen (two not out) took their side to tea.

In the morning session Thakur staged a remarkable fightback for his team, claiming three important wickets just before lunch to reduce the Proteas to 102 for four at the break.

Going into the final 30 minutes of play before lunch the Proteas were well placed on 88 for one, with opener Dean Elgar (28) and Keegan Petersen (62) having survived brutal opening spells from Bumrah and Shami, after they resumed their side’s innings in the morning on 35 for one.

Elgar didn’t look comfortable at all and went 47 balls without scoring a run at a stage, before he started opening up as they neared lunch but then became Thakur’s first scalp as he pushed at a ball that swung away and took the edge of the bat to be caught by keeper Pant to end a 74-run second-wicket stand.

Petersen responded to the wicket emphatically in the next over as he brought up his maiden test half century with a boundary through backward point, before flicking another through midwicket and then driving a third through the covers as Shami’s over went for 12 and the Proteas hundred came up.

An action packed last few overs before the break saw new man Rassie van der Dussen (1) given out caught behind off Shami only for the decision to be overturned on review with the ball flicking off the pad.

Petersen though lost his wicket due to overconfidence as he attempted to drive at a wide ball from Thakur that he should have left, only to get a thick outside edge to Agarwal at second slip.

In the final over before lunch Van der Dussen edged Thakur onto his thigh pad and was caught by Pant behind the stumps to end the session, however replays after the players had left the field suggested the ball may have hit the ground just before being caught, making it a contentious dismissal.

More in this category: « Everton sign right-back Nathan Patterson from Rangers in £16m deal. Lukaku apologises and is back in Chelsea squad for Tottenham semi-final clash. »
back to top