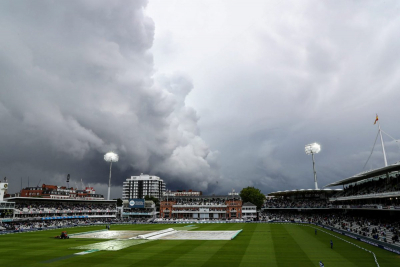 After opting to bat under grey skies and on a green pitch, Australia closed on 126-3 with just 46.5 overs possible.

The start was delayed by half an hour before two interruptions in the morning session and a two-hour delay either side of the tea interval.

The returning Stuart Broad had David Warner caught at second slip by Zak Crawley for 30, while James Anderson had Marcus Harris caught by Joe Root for 38.

Marnus Labuschagne then nicked Mark Wood behind for 28 as England reaped the rewards of their tight, economical bowling.

Play is scheduled to resume at 23:00 GMT on Wednesday night, with Steve Smith unbeaten on six and Usman Khawaja, playing his first Test since 2019, four not out.

England currently trail 3-0 in the five-Test series, and have already lost the Ashes.

Further rain and thundery showers are forecast on days two and four which may make a result difficult and increase England's chances of avoiding a series clean sweep.

Meanwhile, Australia batter Travis Head, who is missing this Test after testing positive for Covid-19, has returned one negative test and two more negative results will see him rejoin the squad on Friday.

Australia batter David Warner: "That's Sydney weather for you. It rains pretty much every Test we play here. We were surprised with how much play we got.

"We were always going to bat. There are quite a lot of cracks underneath the surface. We wanted to be the ones bowling last."

Former England bowler Steven Finn on Test Match Special: "As soon as Marcus Harris was out you saw Joe Root going to Mark Wood and saying 'I need a quick burst from you' and it worked.

"It was a rare day in this series where what England did worked."