Rabada,Ngidi,KL Rahul move up in ICC rankings after Centurion face-off. 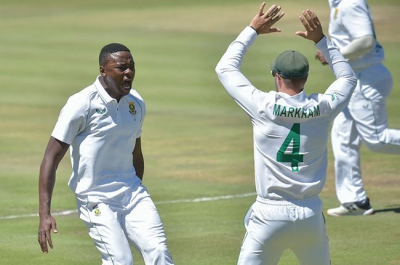 Lungi Ngidi,KL Rahul and Temba Bavuma were the biggest gainers in the ICC rankings following the first Test between South Africa and India in Centurion.

Also benefiting was South Africa's left-arm seam-bowling debutant Marco Jansen, who entered the charts at No. 97 following his faul of five wickets at SuperSport Park, including 4 for 55 in the second innings.

There were other notable movers in the Test rankings as well after India wrapped up a 113-run win, their first at the venue. Mohammed Shami, whose figures of 5 for 44 and 3 for 63 played a big role in the win, moved two steps up to No. 17, while Kagiso Rabada's seven wickets in the match meant he gained one position to be No. 6 in the rankings.

? Jasprit Bumrah into the top 10
? Kagiso Rabada surges up

Jasprit Bumrah and Mayank Agarwal too managed to make a move up in their respective rankings. Bumrah entered the top ten to be ranked ninth after five wickets of his own in the match, while Agarwal's contribution of 60 in the first innings helped him rise one place up to No. 11 in the batting charts.

Ajinka Rahane also moved two places up to No. 25 and South Africa captain Dean Elgar went up to No. 14, gaining two places after a gritty 77 in the second innings.

Marnus Labuschagne continued to lead the batting rankings, while Pat Cummins remained the top-ranked bowler in the format.

More in this category: « Newcastle agree £12m fee with Atletico for England right-back Kieran Trippier. No verdict on Kaizer Chiefs Covid -19 saga,Zola Majavu back. »
back to top