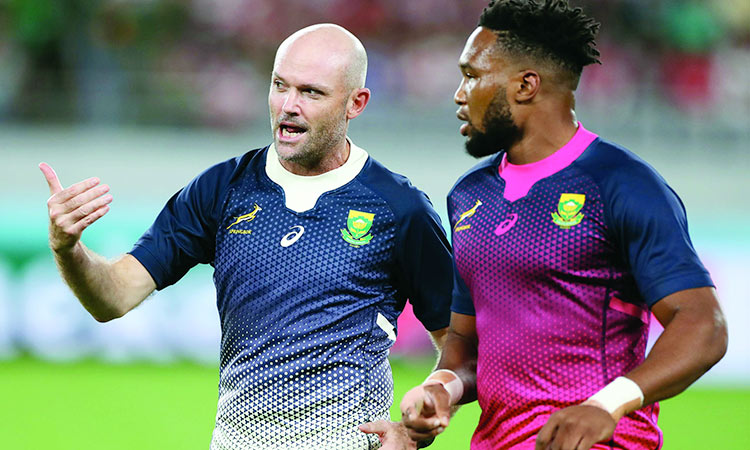 Jacques Nienaber is expected to take charge of world champions Springboks this month despite never playing first-team rugby nor being a head coach.

Nienaber was the defence coach of the Springboks when they won the World Cup a record-equalling third time last November by defeating England 32-12 in the final in Yokohama.

Rasie Erasmus quit as head coach post after that triumph to concentrate on his South African director of rugby role, which places him in charge of all national male and female teams.

He will continue to work closely with Nienaber, who is widely expected to be promoted into the top job in the coming weeks.

"Our partnership does not end when we leave the rugby field, sometimes we have a meal and a drink together," Nienaber told AFP.

"We sometimes disagree over tactics, but we share the same aim of making teams consistently successful. I first met Rassie when we were army conscripts and our rugby relationship began at university where he was the team captain and I was the physio."

"Rassie is a superb tactician and a great person to work with. It helps a lot that neither he nor I suffer from ego problems."

Meanwhile, Rasie was full of praise for his right-hand man.

"His passion, knowledge and work ethic around defence were evident from the start. Jacques deals brilliantly with people, getting messages across clearly."

"He is a wonderful person and, if chosen, would be a great replacement. From physiotherapist to Springbok head coach – what a story."

Tweet
More in this category: « Quinton de Kock has been named as the new ODI captain of the Proteas. African Draw for the FIFA World Cup Qatar 2022: South Africa were drawn in Group G. »
back to top