Attendances capped at 60-80% for AFCON,Zambia on stand-by. 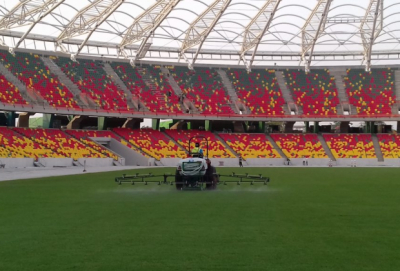 Attendances at the Africa Cup of Nations will be capped at 80% of capacity for games involving hosts Cameroon, and 60% for all other matches at the tournament.

The move by organisers Confederation of African Football (Caf) comes following consultation with the Cameroon government regarding the ongoing coronavirus pandemic.

Spectators must be fully vaccinated and present a negative test result in order to attend games.

Just 2% of people in Cameroon have had both vaccination jabs, according to figures from Our World in Data, but reports indicate there has been an increase in the number of people in the country trying to get vaccinated so they can buy tickets for the competition.

"Caf will continue to monitor the situation and the evolution of the health conditions and adapt measures if needs be," said a statement from African football's governing body.

Cameroon open the tournament against Burkina Faso at the Olembe Stadium in Yaounde, which has a capacity of 60,000, on Sunday (16:00 GMT).

Meanwhile Zambia says they are on standby to play at the Africa Cup of Nations should Zimbabwe be banned by football's world governing body ahead of Sunday's start of the competition.

Last month, Fifa said a ban "may have to be imposed on" Zimbabwe unless the elected FA regained control of the sport from a government-appointed organisation by 3 January.

This has not happened, meaning Zambia are theoretically in line to contest the finals since they finished behind Zimbabwe in their Nations Cup qualifying group.

Zambia missed out on reaching the Nations Cup by a single point, when finishing third behind second-placed Zimbabwe in a qualifying group topped by defending champions Algeria.

Nations Cup regulations state that any team that withdraws "after its qualification in the final tournament, but before its actual start, shall be replaced by the team classified next in the group" (Article 86).

The Fifa deadline of 3 January for the Sports and Recreation Commission (SRC), the body mandated to develop Zimbabwean sport by the government, to hand back control to Zifa has passed without such an event occurring.

Fifa disapproves of governmental interference in the running of member associations and has banned countries from all forms of football as a result in the past.

The next step is for football's governing body to refer the SRC's refusal to hand back control to the "Bureau of Fifa Council for consideration and decision" although it is unclear when the council will next meet.

More in this category: « Barty comes from set down to beat Coco Gauff in Australian Open lead-up. Proteas need 122 runs to win the second Test against India. »
back to top