Proteas need 122 runs to win the second Test against India. 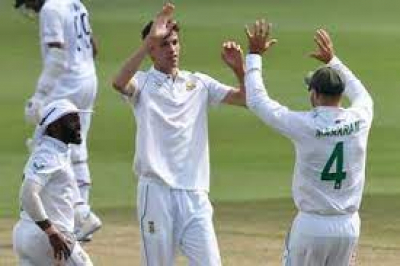 The Proteas were making a good fist of a tricky chase as they reached the close of play on day three of the second test against India at the Wanderers in Johannesburg on Wednesday on 118 for two in their second innings, needing a further 122 runs to win the match.

India had earlier been bowled all out for 266 in their second innings before tea, setting the Proteas a difficult 240 runs to win in a fourth-innings chase.

A decent final session saw the home side add 86 runs to their total, however, they lost two important wickets along the way.

The match is still firmly in the balance with the pitch starting to misbehave a bit more, but if captain Dean Elgar (46 not out) and Rassie van der Dussen (11 not out) can brave the morning storm on day four, they could put the Proteas in a great position to win.

The hosts resumed after tea on 34 for no loss with Aiden Markram continuing where he left off playing positively, however after powerfully cutting Shardul Thakur to the boundary he survived a few close calls only to be trapped LBW at the end of an eventful over for 31 off 38 balls (6x4) with the Proteas on 47 for one.

Keegan Petersen (28) joined Elgar and he looked to pick up where Markram left off, being the aggressor as Elgar played the anchor role, striking four boundaries before he was surprised by a sharply spun ball from Ravichandran Ashwin that trapped him in front, with them slipping to 93 for two.

Van Der Dussen was next in and he and Elgar battled well in the final few overs as the ball spat up from the turf on a number of occasions, to survive to the close with an unbeaten 25-run third-wicket stand to give the Proteas a shot at victory going into day four.

Before tea, the Proteas got their chase off to a solid start as they reached the break on 34 for no loss.

Markram, who has struggled in the series so far, looked to hit himself into form as he struck five boundaries while fellow opener Elgar also looked positive as they scored at a decent rate going into tea.

Earlier in the session, Lungi Ngidi, 3-43, wrapped up the Indian second innings on 266, while Marco Jansen, 3-67, and Kagiso Rabada, 3-77, also made important contributions with the ball.

After lunch the Indian tail wagged, adding what could be a match deciding 78 runs to their total before they were eventually bowled all out -- setting the Proteas a stiff 240 to win in their fourth innings.

Hanuma Vihari (40 not out) played an important role in the lower order’s success, initially anchoring things in a 41-run seventh wicket stand with Thakur, 28 off 24 balls (5x4; 1x6), before opening up towards the end with valuable stands of 17 and 21 with the last two wickets.

Thakur was in a bullish mood as he flayed the Proteas bowlers around, however he went for one shot two many after hammering Jansen for two fours and a six, he again tried to clear the rope at square leg only to be caught by Keshav Maharaj after a valuable cameo, with India on 225 for seven.

That soon became 228 for eight as in Jansen’s next over Mohammed Shami edged a ball down the leg side to keeper Kyle Verreynne to fall for a sixth-ball duck.

Jasprit Bumrah (7) hit one six off Rabada before he was caught by Jansen trying to pull a Ngidi short ball as they slipped to 245 for nine.

Vihari then hogged all of the strike as he scored all 21 runs in the final wicket partnership with Mohammed Siraj, who was bowled by Ngidi with just his second ball faced.

In the morning session Proteas bowler Rabada led a superb fightback from the home side as India reached lunch on 188 for six in their second innings.

It was a see-saw first session as India initially got off to a flying start before three wickets in successive overs from Rabada dragged the Proteas back into the match, while Ngidi added one more to make it a good session.

Ajinkya Rahane (58) and Cheteshwar Pujara (53) resumed India’s second innings on 85 for two at the start of play and after some poor bowling from the Proteas seamers they punished them with regular boundaries as they scored at over five runs an over.

They raced past the hundred run mark, Pujara was first to reach his half century before Rahane cracked Duanne Olivier past point for a boundary to bring up the pair's century partnership, and then off the next ball ramped a ball through the slips for four to reach his fifty.

Having moved the Indian total past 150 Rabada struck with some sublime bowling, first removing Rahane with a short length ball that moved away at the last second to take the edge of the bat and go through to keeper Verreynne with the score 155 for three

In Rabada’s next over he accounted for the other set batsman as Pujara was trapped dead in front by a ball that nipped back off the seam, fruitlessly reviewing only to see the ball would have crashed into leg stump, as they slipped to 163 for our.

In his following over Rabada made it three in three as he first had new man Rishabh Pant desperately fending off a ball that spat up at him off the pitch, with him then coming down the wicket at Rabada off the next ball only to make a wild swing and edge to Verreynne with them on 167 for five.

Ashwin came to the wicket and played aggressively, scoring a quick 16 off 14 balls, however after being dropped by Markram, who made a terrific one handed effort in the slips but couldn’t hold on, off the bowling of Ngidi, he edged the next ball down the leg side to Verreynne to make it 184 for six.

More in this category: « Attendances capped at 60-80% for AFCON,Zambia on stand-by. Liverpool's request to postpone Carabao Cup semi-final at Arsenal granted. »
back to top