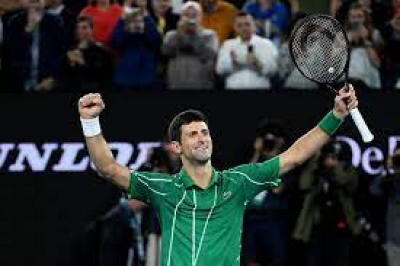 World number one tennis player Novak Djokovic's entry to Australia has been delayed over an issue with his visa.

The player arrived in Melbourne on Wednesday, where authorities noticed that his team had made a mistake on his application.

Djokovic is due to play in the Australian Open, after being exempted from vaccination rules.

But his team had not requested a visa that permits medical exemptions for being unvaccinated.

All players and staff at the tournament must be vaccinated or have an exemption granted by an expert independent panel.

Djokovic has landed in Melbourne's Tullamarine Airport, and is awaiting a decision. He has not spoken about his vaccination status, but last year he said he was "opposed to vaccination".

The country's border force had sought clarification from the Victorian state government about his application.

But state government Minister Jaala Pulford tweeted that his application would not be supported. Visa approvals were a matter for the federal government, she added.

The player was reportedly quizzed in a room in the airport. His current whereabouts and visa status remain unclear.

Earlier, Australia's prime minister said the tennis star will be refused entry to the country unless he provides evidence that he cannot be vaccinated for medical reasons.

More in this category: « Liverpool's request to postpone Carabao Cup semi-final at Arsenal granted. Khawaja hits century as Australia pile on England misery on second day of Ashes Test. »
back to top