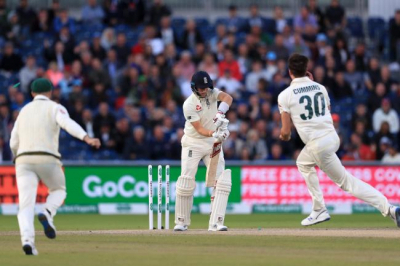 Usman Khawaja scored a classy century to put Australia on top as England toiled on the second day of the fourth Ashes Test in Sydney.

Khawaja, playing his first Test since 2019, produced a well-crafted 137 as Australia declared on 416-8 at the Sydney Cricket Ground.

The 35-year-old left-hander received good support from Steve Smith with 67 and Mitchell Starc, who made an unbeaten 34.

Stuart Broad claimed a fine 5-101, including bowling Khawaja late in the day, but Australia held on to make England face a tricky 20 minutes with the bat.

Zak Crawley was caught in the slips off a Starc no-ball in the penultimate over before England closed on 13-0.

There were familiar problems for England, with Joe Root dropping Khawaja on 28 off Jack Leach, who again struggled for rhythm.

Ben Stokes also pulled up with a side injury midway through an over in the morning session and did not bowl for the rest of the day, despite returning to field.

England are facing a tough task on a pitch that has begun to show variable bounce and with a batting line-up that is yet to pass 300 in the series.

Australia batter Usman Khawaja: "Getting selected for Australia is a bonus for me. I am enjoying my life at the moment. I didn't doubt my ability at 35.

"I've been in a good spot the past few years after I got dropped. I haven't got anything to prove, not to myself nor anyone else. I love playing cricket whether it's at my local club or Queensland. I'm just loving the game."

England bowler Stuart Broad on Test Match Special: "It was Australia's day, no doubt about it. I thought that Khawaja played beautifully. He gave us one chance that we didn't manage to grab hold of.

"We are still in this game and it makes tomorrow a really important today. We always think day three is a really important day in Test cricket, but it is a good opportunity for a batting group that hasn't stamped their authority on this trip to do it."