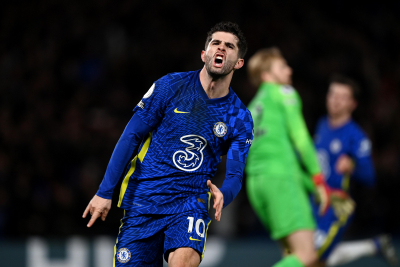 Chelsea took a big step towards Wembley as they beat Tottenham 2-0 in the first leg of their Carabao Cup semi-final.

Kai Havertz struck early for the Blues and a Ben Davies own goal doubled their lead, as Antonio Conte was beaten on his return to Stamford Bridge.

Spurs now face an uphill battle to overturn the deficit at home in the second leg next Wednesday night, while Chelsea and Thomas Tuchel will feel supremely confident of reaching the final of a competition they last won in 2015.

Thomas Tuchel made the surprising decision to switch to a back four and it led to Chelsea's utter dominance of the first half. They were well worthy of their two-goal lead at the break, but from a Tottenham perspective, both goals were entirely preventable.

Japhet Tanganga, one of Conte's changes, was largely responsible for both. After five minutes his pass sold Emerson Royal woefully short, allowing Marcos Alonso to nip in and feed the ball into Havertz, who fired in the opener.

Then after 34 minutes, Tanganga failed to properly deal with Hakim Ziyech's inswinging free-kick, heading it right into the face of Davies as it flew off of him and past the helpless Hugo Lloris.

It showed how in control Chelsea were in the first half that Conte, himself also a master of the back five, switched Spurs to a back four to try and match up with Tuchel's system.

But it didn't do much to the pattern of proceedings, and Chelsea still remained in charge. On 66 minutes they should have taken the tie almost beyond Tottenham as Hakim Ziyech's stunning volleyed pass found the run in behind of substitute Timo Werner, but his lofted attempt failed to beat Hugo Lloris.

And Conte appeared to accept their first-leg fate as he withdrew Heung-Min Son and Lucas Moura late on, preserving their legs for the challenge ahead.

Chelsea's Thomas Tuchel: "It seems like a deserved win and it's an excellent result as it reflects the game. We could've scored even more but this is football and it's hard to score against a team like Tottenham, it's hard to even create chances but we did create a lot in the second half - some huge chances so it could've been possible to score more so that's the downside of it.

"It's a tough match that's not been decided yet so we're going to have to work for 90 minutes with the same quality and same level of commitment again."

Tottenham's Antonio Conte: "It was a difficult game, from the start. Chelsea showed they were much better than us. In the first half, we struggled a lot but we know that we're talking about one of the best teams in Europe and in the world.

"Last year, they won the Champions League and if you compare the two teams I think there's not a comparison. We're talking about a team that's ready to win and they've played an important part over many years. Today, we have seen the difference between the two teams."

More in this category: « Khawaja hits century as Australia pile on England misery on second day of Ashes Test. Australia cancels Novak Djokovic’s visa after tennis No1 was 'held in room. »
back to top