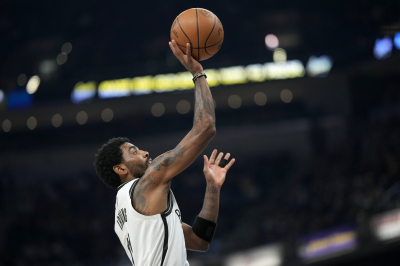 In December, the Nets reversed an earlier decision that the 29-year-old could not play until he was vaccinated.

The NBA All-Star can now play part-time but will miss games in areas that require players to be jabbed - including the Nets' New York home.

Able to make his season debut in Indiana, the point guard scored 22 to help Brooklyn win 129-121.

Playing for the first time since June, Irving helped the Nets overturn a 19-point deficit and end a three-game losing streak.

Stricker Covid-19 protocols have been introduced in the NBA, with several teams missing players and coaches because of the virus in recent weeks.

The Philadelphia 76ers welcomed back head coach Doc Rivers with a win after he cleared Covid protocols.

December's Eastern Conference player of the month Joel Embiid scored 31 points and Seth Curry had 20 points and 12 assists as the Sixers beat the Orlando Magic 116-106.

In Denver, Bojan Bogdanovic's season-high 36 points and career-best 13 rebounds helped the Utah Jazz beat the Nuggets 115-109, while the Miami Heat beat the Portland Trail Blazers by the same scoreline.

Kevin Huerter starred off the bench as the Atlanta Hawks beat the Sacramento Kings 108-102 and Kevin Porter Jr's three-pointer with less than half a second remaining sealed a 114-111 win for the Houston Rockets at the Washington Wizards.

In Dallas, the Mavericks beat the Golden State Warriors 99-82 and in Milwaukee Pascal Siakam's season-high 33 points helped the Toronto Raptors beat the Bucks 117-111.

The San Antonio Spurs claimed a 99-97 victory against hosts the Boston Celtics, the Charlotte Hornets beat the Detroit Pistons 140-111 and the Minnesota Timberwolves won 98-90 against the Oklahoma City Thunder.

More in this category: « Barcelona overcome Covid-19 crisis to advance to Copa del Rey last-16. Arsenal fined £20,000 by FA after admitting they breached player conduct rules. »
back to top