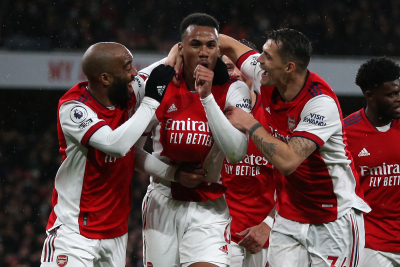 Arsenal have been fined £20,000 after accepting a Football Association charge for failing to ensure their players conducted themselves in an orderly fashion against Manchester City.

In Saturday's home defeat, Gunners defender Gabriel was sent off after receiving a second yellow card.

The Brazilian was booked twice inside two minutes as City came from behind to win 2-1.

Shortly before the second booking, City were awarded a penalty.

Referee Stuart Attwell overturned his initial decision and gave the spot-kick after viewing the pitchside monitor.

And, just a minute after conceding from the spot, Gabriel was dismissed. His first yellow card came for trying to scuff up the penalty spot, while his second caution was for a foul on Gabriel Jesus.

Bukayo Saka had given Arsenal the lead, with Riyad Mahrez levelling from the spot and Rodri scoring in stoppage time to complete the comeback win.

After the game Arsenal assistant manager Albert Stuivenberg and goalkeeper Aaron Ramsdale called in for more consitency in referees using the pitchside monitor.