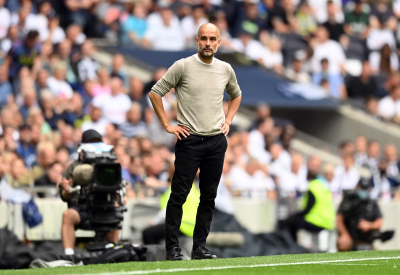 Manchester City’s Pep Guardiola was joined by the coach who beat him in the 2021 Champions League final, Thomas Tuchel of Chelsea, on the FIFA shortlist Thursday to be named best in the world.

Guardiola won his third Premier League title at Man City last season though the European title has eluded the club.

The shortlist of three candidates for the FIFA coaching award in men’s soccer was completed by Roberto Mancini, who led Italy to the European Championship title.

European dominance was confirmed in the FIFA shortlist for the coaching award in women’s soccer.

Lluis Cortes of Champions League winner Barcelona was joined by Emma Hayes of beaten finalist Chelsea and Sarina Wiegman, who left Euro 2017 winner the Netherlands after the Tokyo Olympics to take over at England.

Bev Priestman, the English coach of Olympic gold medalist Canada, did not make the shortlist.

Voting was by national team coaches and captains worldwide, specialist media and fans making their choices on FIFA's website.

FIFA will announce winners on January 17 in an online ceremony from its headquarters in Zurich.

The three-player shortlists for men and women will be announced Friday.

City's 50-year-old Spanish boss and his assistant Juanma Lillo were both found to have the virus on Tuesday.

The pair are among 21 people at City isolating before the cup tie at Swindon Town on Friday.

Neither Burnley nor Manchester City gave any indication that their cup games are at risk of being postponed because of the positive Covid cases.

More in this category: « Dean Elgar's 96 seals gutsy victory for Proteas over India. AC Milan close gap on leaders Inter after home win over Roma. »
back to top