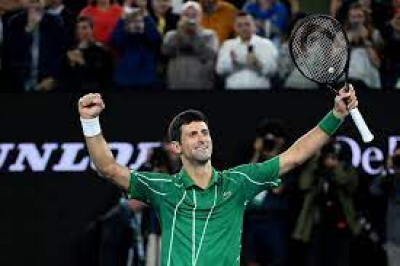 Novak Djokovic is not being held captive in Australia, a top official says, as the men's world number one tennis player faces deportation over Covid vaccination rules.

"He is free to leave at any time that he chooses to," Home Affairs Minister Karen Andrews said.

The Serb star remains in immigration detention in Melbourne after being denied entry on Wednesday.

A court challenge is due on Monday, a week before the Australian Open begins.

Now more uncertainty surrounds the schedule of the tournament that Djokovic has won nine times. A 10th win would see him become the men's most successful player, with 21 Grand Slams.

He had been granted a medical exemption to play in the tournament for unspecified reasons, in a decision that infuriated many Australians. More than 90% of the country's adult population are fully vaccinated, but they still face restrictions as cases of infection rise.

Djokovic's exemption was given by two independent medical panels organised by Tennis Australia, the body that runs the event, and Victoria state.

Prime Minister Scott Morrison is also being accused of politicising the issue. The prime minister himself is under pressure amid the surge of Covid-19 infections in the country, and a federal election is likely to be held in May. Mr Morrison has denied the visa cancellation was because of "any particular position in relation to Serbia".

But Serbian President Aleksandar Vucic has said Djokovic is a victim of "harassment". As Serbs celebrated Orthodox Christmas on Friday, Serbia's Patriarch Porfirije sent a message of support to Djokovic, saying that millions of Orthodox Serbs were praying for him.