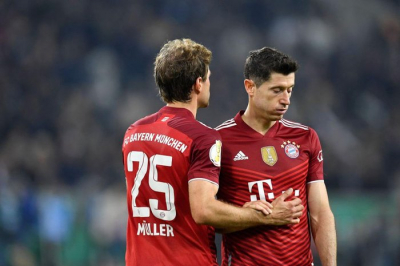 Bayern named a makeshift XI as they had more than a dozen players out, including nine absent with Covid-19.

But they still enjoyed a strong start and Lewandowski, who came close in the 15th minute, was on target a little later with his 20th goal of the season, after he shook off his marker with a brilliant first touch and fired in with a powerful shot.

Lewandowski put the hosts ahead with a powerful shot for his 20th Bundesliga goal of the season midway through the first half.

But mid-table Gladbach scored twice in four minutes to take the victory.

Florian Neuhaus volleyed in the equaliser and the visitors went ahead in the 31st minute when Stefan Lainer headed in from a corner.

There were no fans at the game at the Allianz Arena because of Covid restrictions in Germany and, despite dominating early on, Bayern struggled without key players including Manuel Neuer, Lucas Hernandez, Leon Goretzka, Leroy Sane, Alphonso Davies and Kingsley Coman.

Lewandowski's goal did ensure the reigning champions have now scored in each of their past 65 Bundesliga games, equalling the league record they set themselves in 2014.

Running out of options from the bench, Bayern coach Julian Nagelsmann brought on Paul Wanner, who at 16 years and 16 days became the youngest Bayern player to make his Bundesliga debut, and 17-year-old Lucas Copado, but the champions could not find an equaliser.

Bayern are on 43 points with Borussia Dortmund, who travel to Eitracht Frankfurt on Saturday, in second place on 34.

More in this category: « Antonio Conte invites Christian Eriksen to train with Tottenham. Naomi Osaka withdraws from semi-final of WTA tournament due to injury. »
back to top