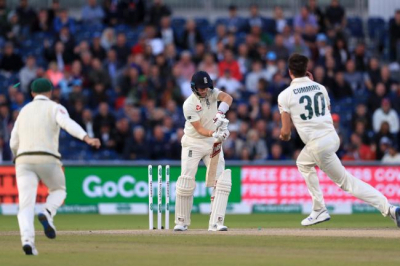 Australia's Usman Khawaja hit another classy century to leave England needing to bat out the final day to save the fourth Ashes Test at the Sydney Cricket Ground (SCG).

Khawaja made an unbeaten 101 from 138 balls, to follow his 137 in the first innings, as Australia set England an unlikely 388 to win.

With dark storm clouds closing in, England openers Zak Crawley and Haseeb Hameed survived a tricky 11 over and 50 minute period to reach 30-0 at stumps.

Crawley will resume on 22 and Hameed eight when play resumes at 23:00 GMT on Saturday, with 98 overs scheduled on the final day, when the forecast is mixed.

Khawaja shared a partnership of 179 with Cameron Green (74) for the fifth wicket as the hosts recovered from 86-4 to keep Australia's hopes of a 5-0 series clean sweep alive.

Earlier in the day, England added 36 runs to their overnight 258-7, with Jonny Bairstow only able to add 10 more runs before feathering Scott Boland behind to fall for 113.

That left a first-innings deficit of 122 and continued a dismal series with the bat, with the tourists yet to reach 300.

Substitute Ollie Pope kept wicket for England - and did an excellent job, taking four catches - with Jos Buttler and Jonny Bairstow both spending the day off the field with hand injuries.

They - along with Ben Stokes, who did field despite ongoing troubles with a left side strain - have had scans and will continue to be assessed before the fifth Test, which starts in Hobart on 14 January.

England caretaker coach Graham Thorpe on TMS: "I'm confident [that we can draw] that if we have the right approach and if we don't go into our bunkers as well because I think when you're playing for the draw you must keep that intent because it makes you move better and allows you to make better decisions.

"I want the guys to enjoy the contest tomorrow - Australia will come hard and tonight was a good example of our players' temperament and technique being good."

Australia batter Usman Khawaja: "I couldn't stop smiling. I was grateful with one hundred, but I'll take the second one too.

"It reminds me of an old-school SCG wicket. Hopefully it will be a dry day and we can get some reverse swing. Nathan Lyon will hopefully come into the game."

More in this category: « Strong Manchester City side ease past fourth-tier Swindon in FA Cup. Australian government gave Djokovic a writted vaccine exemption because he had Covid in Dec. »
back to top