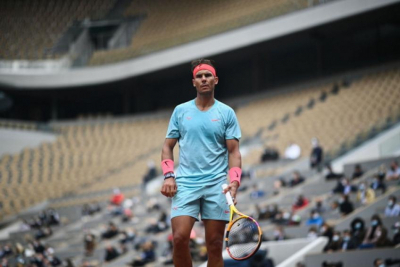 Rafael Nadal says reaching the Melbourne Summer Set final is an "important comeback" in his first competitive tournament since August.

The 20-time Grand Slam champion missed the end of the 2021 season with a foot injury and had Covid-19 in December.Nadal will face qualifier Maxime Cressy in the Melbourne final after beating Finland's Emil Ruusuvuori 6-4 7-5.

"It's an important comeback after five months outside of competition," the Spaniard said.

"I need to do some things better on court, but it's step by step. My body is holding up and that's the main thing.

"I need matches to get back to 100%. I know my tennis isn't perfect, but it's about being patient and doing my best."

In Sydney, Canada set up their first ATP Cup final against Spain after fighting off defending champions Russia in a tense semi-final doubles rubber.

Denis Shapovalov and Felix Auger-Aliassime came from behind to beat Daniil Medvedev and Roman Safiullin 4-6 7-5 10-7 in the decider on Saturday.

World number 14 Shapovalov won his singles match against 167th-ranked Safiullin 6-4 5-7 6-4, before world number two Medvedev levelled things with a 6-4 6-0 defeat of Auger-Aliassime, who is ranked 11th.

A Canadian break of serve late in the second set meant the doubles was decided by a tie-breaker in Sydney and Shapovalov and Auger-Aliassime maintained their momentum to claim victory.

Shapovalov said: "We kept fighting. Felix played unbelievable in the game to break and then in the tie-break as well, just making them play so much.

More in this category: « Australian government gave Djokovic a writted vaccine exemption because he had Covid in Dec. Manchester United midfielder Paul Pogba out at least another month. »
back to top