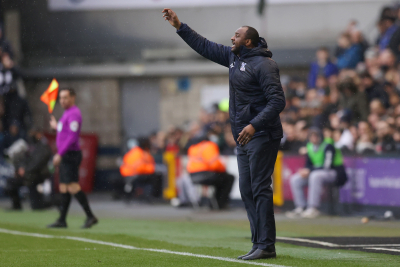 The game was marred, however, by some unsavoury scenes off the pitch.

A section of the home crowd discernibly booed Palace players taking the knee in support of the Black Lives Matter movement before kick-off.

There were also audible homophobic chants directed at Palace's on-loan Chelsea attacker Conor Gallagher, while a bottle thrown from the stands struck Olise as he prepared to take a corner.

Palace were without several first-team regulars including Wilfried Zaha, Cheikhou Kouyate and Jordan Ayew, all away on international duty at the Africa Cup of Nations - and Olise grasped the opportunity their absences handed him.

Making just a third start for Patrick Vieira's Eagles, he almost single-handedly turned the game on its head from the moment he cut inside to bend a fine strike in off the post to bring Palace level less than a minute into the second half.

Olise curled a near-replica of that strike against the post moments later and sent another measured narrowly over before his pinpoint centre gave Mateta the easiest of tasks to head the visitors in front.

Millwall might have felt aggrieved about Mateta's involvement in the equaliser, with television replays showing he had strayed offside in the build-up, but the video assistant referee system is only in use at Premier League grounds in the FA Cup, so the goal stood.

The comeback bailed out Butland, whose last international cap came in 2018, was making just his fifth Palace appearance since joining them in October 2020.

Dawdling on the ball under pressure from two Millwall forwards, despite having two unmarked team-mates nearby, he presented it straight to Afobe, who gleefully swept home into an empty net.

Millwall had been easily the better side to that point, with Scott Malone clipping the bar direct from a corner and Afobe blazing over a decent chance from Bradshaw's near-post cross.

But they failed to build on the gift and were undone by Olise's virtuoso response, although substitute Michael Smith could have forced extra time, sending a late header straight at Butland.

The early KO's for day two of the #EmiratesFACup third round are settled ?

What was your highlight? ? pic.twitter.com/JuMMfpmJtf

Millwall boss Gary Rowett, speaking to ITV: "I thought we played really well for most of the game. I thought the first half was a really good performance in many ways - both on the ball and off the ball, I thought we were excellent.

"We concede a really poor goal in the 46th minute - you can't do that against Premier League opposition. Olise is a really good player and you've got to force him on to his right foot.

"The second goal, again, it's a ball into the box, it's a header that we've got to go and mark.

"Then we had moments ourselves. I thought we stayed in the game quite well but you can't give two goals to a Premier League side and that's the disappointing thing."

Palace boss Patrick Vieira, speaking to ITV: "I was happy with the first half that we played, but we didn't use the ball well enough. We conceded a goal by a mistake that we made and we wanted to win the game because we wanted to support Jack [Butland] - this is the way we want to play and sometimes it can lead to mistakes.

"But I was really pleased with the character and determination we showed in the second half.

"In the first half, it was difficult for Michael [Olise] to find space. We changed the shape a little bit in the second half so he played wider and we created situations where he was one-v-one - he's capable of coming inside or going outside and the goal he scored showed his quality."