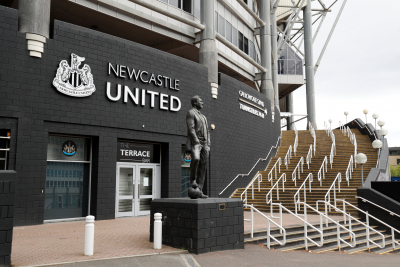 The striker, who grew up idolising Newcastle legend Alan Shearer, turned in the winner from close range 11 minutes into the second half.

It proved a miserable Newcastle debut for Kieran Trippier, the defender signed from Atletico Madrid on Friday.

Goalkeeper Dimitar Mitov was superb as Cambridge saw out the win.

Mitov made a stunning stoppage-time save from Joelinton in as 5,000 visiting fans celebrated.

Those visiting supporters, high up behind the goal, were rewarded for their long journey north with a battling performance.

Though Mitov kept them in the game for long spells in the first half, they caused problems on the counter attack and defended superbly as the game went on.

Newcastle, without the injured Callum Wilson, looked devoid of ideas as a miserable campaign continued.

For the home support, it was meant to be a day of celebration following the arrival of new signing Trippier - but instead they fell to defeat, and remain with only one win to their name in all competitions this season.

Roared on by a near-sellout crowd, the hosts asserted themselves by dominating possession and pressing high early on. But Cambridge had a sight of goal within five minutes, when Adam May drifted into the box and struck over the bar.

Allan Saint-Maximin was heavily involved for Newcastle, who took just under 20 minutes to create an opportunity. The Frenchman met Jacob Murphy's cross at the back post, but couldn't keep his header on target.

Moments later, Saint-Maximin went close again as Newcastle began to turn the screw. This time, he couldn't guide Joelinton's scuffed shot goalwards, before feeding Murphy, who forced Mitov into a smart save.

Mitov was alert to deny Saint-Maximin and Murphy again, while Fabian Schar put the ball in the net for the hosts, only to be called offside. Murphy then had a shot tipped on to the bar just before half time.

Murphy thought he'd opened the scoring for Newcastle six minutes into the second half, but like Schar, he was denied by an offside flag.

Cambridge took the lead five minutes later through Ironside - a boyhood Sheffield United fan who grew up with Shearer as his hero.

Goalkeeper Martin Dubravka appeared to have smothered the danger as the visitors threatened his goal, but was then robbed of the ball and, after Schar failed to clear, Middlesbrough-born Ironside tapped home from close range - with the goal standing after a VAR check for a possible offside.

After a penalty-shootout that feels like it lasted ???????, all our 3pm KO's are finished ? pic.twitter.com/SIlgAXHhSk

To sum up his heroic day, Mitov made a stunning save from Joelinton in stoppage time to clinch the win for the lower league side.