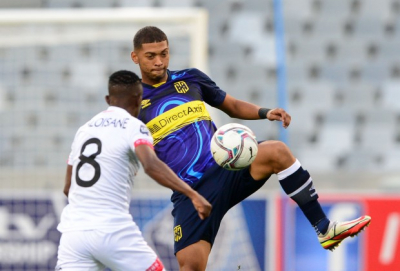 The 23-year-old Roberts, who broke into City's Premiership side in 2018 with great fanfare, has not been able to command a regular starting berth. He made his debut against Kaizer Chiefs. Most of his 43 appearances since 2018 have been off the bench.

TS Galaxy Football Club is delighted to confirm that the club has reached an agreement with Cape Town City for the services of Shane Roberts on a six-month loan deal.

The 23-year-old midfielder rose to prominence for the Citizen when he made his professional debut back in 2018 against Kaizer Chiefs and has not looked back since then.

Roberts has expressed his delight at securing a switch to the Rockets, after only making five appearances at the Citizens this season.

"I'm excited to join TS Galaxy FC. This is a new chapter for me in my career. I want to help the club improve its league position. I aim to assist the club progress and growing using my qualities. We have to get the club to where it belongs," Roberts said in a statement released by the club.

"This is a new challenge and I'm ready to embrace it. For me, it is the new province and climate. I'm here to express new things with the club. I'm happy to be where I am right now. I'm looking forward to spending my time with the Rockets and I'm here to stay."

Hlongwane was a key member of Ernst Middendorp’s team, but lack of discipline landed him in hot water with the club, and he was left kicking his heels on the sidelines.

More in this category: « Steyn shifts focus from Bok kicks to Be that Dad. Manchester United beat Aston Villa 1-0 to advance into FA Cup fourth round. »
back to top