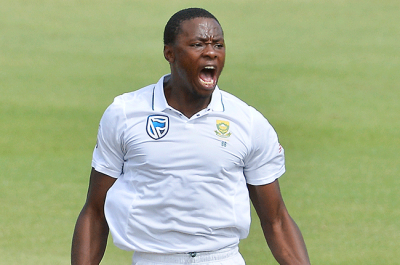 Kagiso Rabada celebrated his 50th test match by claiming 4/73 to help the Proteas dismiss India for 223 in 77.3 overs on an absorbing first day of the third and decisive test at Newlands in Cape Town on Tuesday.

India did enjoy some late satisfaction, however, when paceman Jasprit Bumrah had South Africa’s captain, Dean Elgar (3), caught at first slip by Cheteshwar Pujara in the fifth over. Elgar, who struck a match-winning unbeaten 96 at the Wanderers to level the series, was turned square by the delivery, edging a comfortable catch to Pujara to the visitors’ evident delight.

Nevertheless it was an excellent opening day for the home team as they finished on 17 for one, a deficit of 206, with nightwatchman Keshav Maharaj at the crease with Aiden Markram.

Rabada was South Africa’s fierce inspiration throughout the day, with his haul including the prize scalp of Indian skipper Virat Kohli, who was the visitors’ hero, striking 79 in a marathon knock spanning 201 balls – his highest test innings in more than two years as well as his longest.

Kohli’s patient, watchful and highly disciplined effort – a masterclass of defensive batting on a difficult pitch – was not replicated by his fellow batsmen, however, with the exception of Pujara (43 in 77 balls) who shared in the biggest partnership of the innings with his captain, 62 in 153 balls for the third wicket. Otherwise, the only partnership of note was that of 51 in 113 balls between Kohli and the flamboyant Rishabh Pant who eventually let his frustration get the better of him when he had reached 27.

Rabada was the flag bearer for the home team, bowling with hostility, discipline and penetration in four spells that comprised a total of 22 overs. His battle with Kohli was the highlight of the day and it was Rabada who eventually proved victorious as he enticed the Indian captain into nibbling one behind as he looked to increase the scoring rate at the end of the Indian innings.

The only possible blot on Kohli’s day was his brave but debatable decision to bat first on an overcast day on a well-grassed pitch that offered plenty of encouragement for South Africa’s pacemen. Ironically, once India’s regular batsmen had been dismissed after tea, the clouds receded and the home team started their innings in blazing sunshine.

With the ball seaming about and often rising sharply off a length, it was no surprise that all the Indian wickets fell to catches – most of them behind the stumps with wicketkeeper Kyle Verreynne claiming five of them.

Verreynne’s first victim was that of KL Rahul when India’s total had reached 31, the delivery leaving him off the pitch and offering the wicketkeeper a comfortable catch. Two runs later Rabada struck his first blow, claiming the wicket of the other opener, Mayank Agarwal, who edged a firm push to Markram at second slip.

Kohli, will rarely have scored harder runs than he did in the afternoon session after he went into lunch on 15 in 50 deliveries. In all it took him 88 balls to score his first 20 runs – with many deliveries skillfully left alone outside his off-stump.

India only lost one wicket in the afternoon, with Pujara going for 43 to an excellent delivery from Marcus Jansen who once again impressed with overall figures of 3/55 in 18 overs. Pujara who once again adopted a more positive approach, struck seven fours in his 77-ball innings before he was defeated by a delivery that angled in and then straightened to take the edge.

Pujara’s dismissal was the culmination of some tight bowling by Duanne Olivier and Lungi Ngidi after lunch, restricting India to six runs in the first six overs, with Jansen eventually claiming the reward.

Rabada’s third spell was his best, beginning with the dismissal of Ajinkya Rahane who feathered a catch to Verreynne off a delivery that spat and seamed away from him.

Kohli was joined by Rishabh Pant, fresh from his wild slog at the Wanderers, and the two featured in a half-century partnership that entertained but never looked secure, largely because Pant was always looking for the attacking shot on a pitch that didn’t encourage them.

Eventually, his impatience got the better of him as he tried to engineer a cut to a delivery from Jansen that rose sharply, resulting in an easy catch to Keegan Petersen in the gully.

Aside from his defensive skills and intense concentration, Kohli’s innings was characterised by some beautiful drives, straight and through the covers as he almost singlehandedly kept the momentum of the Indian innings going.

Kohli was involved in a contentious episode shortly before tea when Olivier appealed for a catch down the leg side after the batsman flicked at a delivery. Umpire Adrian Holdstock turned the appeal down but South Africa asked for a review with the video showing some slight indication of an edge but without the necessary certainty to overturn the original decision.

Despite Kohli’s efforts after tea, South Africa’s bowlers swept away the Indian tail as they restricted the visitors to a disappointing first innings total.