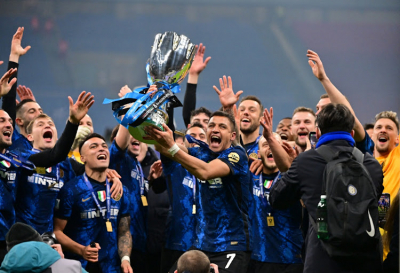 The forward stunned Juve with the final kick of a game that was heading to a penalty shootout.

Weston McKennie had opened the scoring for Juve only for Lautaro Martinez to level with a first-half penalty.

Inter's Denzel Dumfries had a header tipped on to bar in normal time before Sanchez won it in extra time.

The former Arsenal and Manchester United forward pounced when Matteo Darmian managed to prod the ball into his path after Juve defender Alex Sandro failed to control and clear a Federico Dimarco cross into the box.

Victory secured Simone Inzaghi his first piece of silverware as Inter boss, having taken over from title-winning manager Antonio Conte in the summer.

It was also a third Super Cup triumph for the 45-year-old as manager, having twice previously guided Lazio to victory against Juventus in the showpiece event.

Inter, who are top the league and 11 points ahead of the Bianconeri in fifth, hit back from the spot soon after, with Martinez smashing home his 12th goal of the season following Mattia de Sciglio's foul on Edin Dzeko.

Federico Bernardeschi squandered two early second-half chances for Juve, while Mattia Perin produced a fine save at the other end to tip a Dumfries header on to the woodwork.

Perin also dealt with a Martinez header in normal time and Sanchez nodded just off target in the first half of extra time before going on to earn a sixth Super Cup win for the Nerazzurri in remarkable late fashion.

More in this category: « Chelsea reach Carabao Cup final after win over Tottenham. West Ham up to fourth as Jarrod Bowen brace sinks Norwich. »
back to top